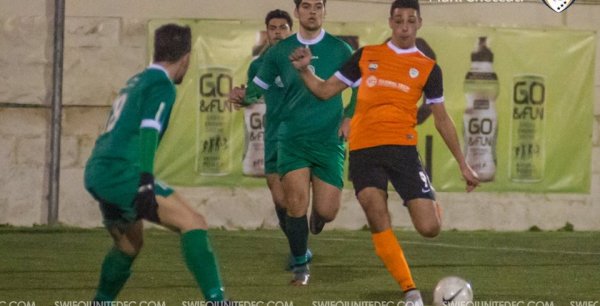 Swieqi United's U19 team mathematically secured a position in Section B next season with a 10-0 demolition of Mgarr United, the highlight of the evening being two separate hat tricks scored by Jake Scerri and Isah Doma Yusuf.

The match was all but over as a contest within the first ten minutes of play, as the Orange raced into a 3-0 lead thanks to goals from Scerri, Ben Caruana and Yusuf.

The goals rapidly kept on coming for the Orange, as an own goal scored in a goalmouth scramble from a Swieqi corner, and efforts from Yusuf, Luke Taliana and Scerri, made it 7-0 within the first 35 minutes of play. Yusuf then wrapped up his hat trick with a tap in to lead the Orange into the break with a very comfortable 8-0 lead.

To their credit, Mgarr came out as an improved outfit for the second half, and were more assured at the back and enterprising in their play. Nonetheless, midway through the half, Scerri secured his hat trick with arguably the pick of all the goals - a mazy run from inside his own half resulted in a curling shot into the top left corner of the net from around 25 metres out. Substitute Tejumola Ayorinde then scored Swieqi's final goal five minutes from time to complete the rout.

Swieqi will take on Naxxar Lions in their next league game, safe in the knowledge that another victory will mathematically secure the Section C championship.