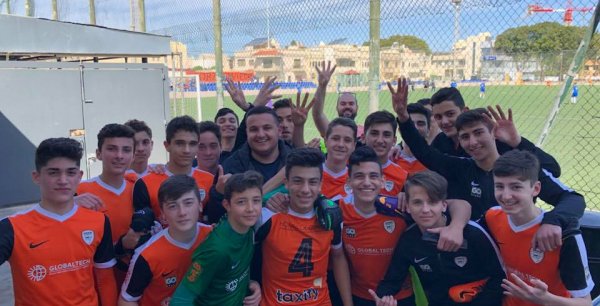 The Young Owls took an early lead, as after just three minutes, Sasha Peric curled the ball into the net. However, Rabat turned the game on its head relatively quickly, scoring two goals in quick succession. However, this spurred the Orange on, as the boys stepped up their game and fought for an equaliser. Nick Borg was then fouled in the box, and the referee awarded a penalty. David Cardona made no mistake, and levelled by the score by scoring from the spot.

The first half sprung to action just before the break. Five minutes before the end of the first half, Rabat were awarded a penalty, which they subsequently missed. Three minutes later, Daniele Ferlaino dribbled past the Rabat defence and passed it to Timmy Naudi, who gave Swieqi a well deserved lead. The Owls then scored a fourth thanks to an effort from Ferlaino.

In the second half, Swieqi controlled the game and were rarely troubled at the back. Despite various occasions on goal, the game ended 4-2.

The team shall play their next game on Sunday 8th April at 13:00 against Zejtun at Dingli Ground.