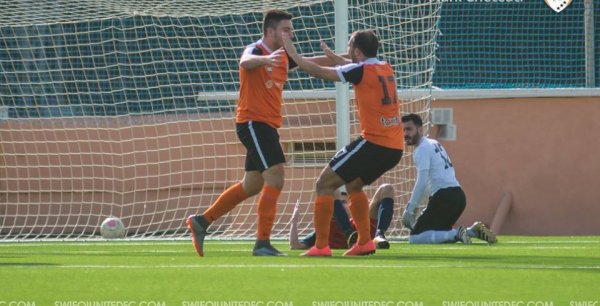 Swieqi United produced one of their best ever performances when they comprehensively beat Birzebbuga 4-1 at the Centenary Stadium.

The Orange came out all guns blazing and played some good football throughout the first half - with the all elusive goal just denying them the cutting edge they deserved. Thankfully, in the 39th minute, Ion Alin Margarit opened the scoring with a beautifully taken goal from way outside of the box.

Sean Gatt Baldacchino then made 2-0 right before half-time when he chested a cross from Luke Bianco into the net. Come the break, Swieqi were therefore in cruise control.

Right after half-time, Nicholas Schembri made it 3-0 with a close-range header, before Kyle Muscat sealed the three points after tapping into the ball into an empty net, after the Birzebbuga keeper had initially saved a header. The Southerners reduced the arrears seven minutes from time with a free kick, but it was nonetheless Swieqi's day.

The Orange next face St. George's in another important fixture. The game will be played at the Luxol Stadium.