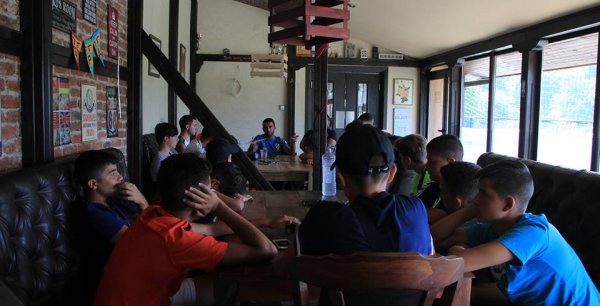 All Academy teams, from Under 9 to Under 17 level, took part in a fantastic live in held during the first weekend of November. A total of sixty players took part.

On Friday evening, players were given an introduction by head coach Andrea Vella, as they settled into their rooms. The younger groups started off with outdoor and football activities, while the older teams were given an interesting talk on life values and skills. During dinner, all the boys had time to gel together, once again proving Swieqi to be a united club. The Under 15s and 17s then had team bonding activities organised and ended off the night with a football tournament, with teams consisting of a mix of both squads. Coaches also had their own team, and competed against the Young Owls.

On Saturday, all players and staff were awake at 6.30 am for an early breakfast. The Under 9s, 11s and 13s headed to Siggiewi for various football matches, while the Under 15s and 17s went off to Mdina to participate in a treasure hunt organised by the club. Following lunch, the Under 15s were involved in a friendly match against Balzan at St Aloysius College ground, with the U17s joining in to support the boys. The squad played a fine match and beat Balzan 2-0. This was then followed by an orienteering activity, with the boys walking all the way from Buskett to Siggiewi, joined by the younger age groups. The players then attended the club organised Pasta Night at Ibragg Parish Church, ending a very eventful and tiring day.

Sunday was an early start once again for the boys, as following breakfast, the younger groups had friendlies organised in Mellieha and Swieqi, while the Under 17s had a friendly in Kalkara, which game was attended by the Under 15s, who lent their support to the older group. Following this, the players had lunch together before heading off to watch the Seniors squad play against St. George's at the Sirens Stadium, a match which ended 1-0 to Swieqi. Even though the kids were visibly tired and exhausted, all of the boys had a blast throughout the whole weekend.

Special thanks goes to all the staff who helped out both during the weekend and in the weeks before, as lots of hours were spent in preparation for this super event. Well done to all and forza Swieqi!