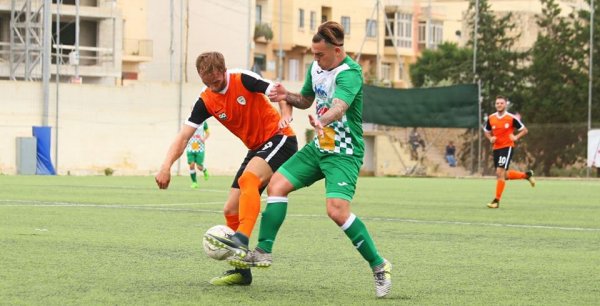 11.11.17 Seniors: Swieqi defeat Kalkara in top of the table clash

eniors: Swieqi defeat Kalkara in top of the table clash

It was 1st against 2nd at the Sirens Stadium, as Swieqi United met Kalkara in a clash between the BOV Second Division's two leading outfits. In a very balanced encounter, the team that wanted the victory most was always bound to win and Swieqi struck gold after 61 minutes, when Ion Alin Margarit raced through unmarked to slot the ball past the hapless opposition keeper.

Both sides exchanged good chances throughout the 90 minutes. Swieqi went agonisingly close in the first half through Nicky Schembri, whose header failed to trouble the keeper, whilst Kalkara almost scored right before half time with a close range shot.

On 55 minutes, Kalkara missed their best opportunity to score when Timmy Thomas rounded goalkeeper Jean Debattista but his shot went tantalisingly wide of the post. Swieqi then made their opponents pay thanks to Margarit's fine finish, a goal which ultimately sealed the tie, but the Orange were forced to defend very well, especially during the last 10 minutes of this fixture, to win another important three points!

Swieqi remain top of the league on 20 points, four ahead of both Kalkara and Fgura, who the Orange face next week in another critical fixture for the team.