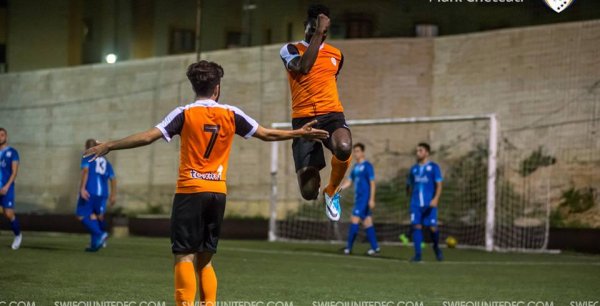 10.11.17 U19: Minors continue solid run with clinical victory against Sirens

Swieqi United's Under 19s made it eight wins from eight in the league this season when they comfortably defeated Sirens 4-0 at the Pembroke Stadium.

The match was certainly very competitive in the middle of the park and it took time for the Orange to get going. That said, they started the brighter of the two but Sirens were always dangerous on the counter.

Luke Mamo managed to break the duck after 29 minutes when his powerful and well placed free kick gave the Sirens goalkeeper no chance. Isah Doma Yusuf doubled the lead three minutes later when a clinical volley found its way into the roof of the net.

In the second half, Sirens came out all guns blazing and would have almost scored had goalkeeper Edward Gatt not made some great saves. The match was finally put to bed in the 74th minute when Tejumola Ayorinde's run down the left led to the Nigerian crossing into the box and Yusuf once again scored from close range. In the dying minutes of the game, the same Yusuf made it 4-0 with a neat finish past the goalkeeper.