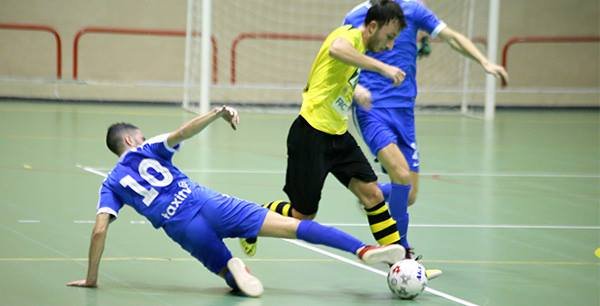 Following their heartbreaking loss against Valletta in the previous game, Swieqi took on the challenge of Qormi on Thursday night. Owing to suspensions and numerous injuries, Swieqi had to change their normal game plan, with coach Farrugia only having nine players at his disposal.

The first half was one way traffic, with Swieqi trying to build a good lead and Qormi staying for much of the game in their own half. Chris Cardona broke the deadlock on the 7th minute with a fine finish. Two goals in quick succession by Ryan Xuereb and an unfortunate own goal by Qormi's Miguel Alcaraz gave Swieqi a comfortable 3-0 lead mid-way through the first half. Ryan Cutajar was unlucky to see his brilliant effort hit the post on the 14 minute mark, but Shota Chanukvadze was on hand to tap in the rebound. Qormi did manage to pull a goal back seconds later through Andrew Catania. Swieqi continued pressing the Qormi goal and added a further two goals through some great team work, with Zurab Lukava and Cardona scoring the two goals, the latter coming from the penalty spot. Swieqi headed into the half time break with a comfortable 1-6 lead.

Lukava quickly scored Swieqi's seventh goal soon after the restart. Qormi then began to enjoy some good possession futsal and were rewarded with two goals through Bertram Azzopardi and Clayton Borg. The second half was otherwise a mellow affair, with Swieqi having to take their foot off the pedal power due to knocks and injuries suffered to their players in the game. Qormi's custodian was unfortunate to concede a goal despite his best efforts to keep the ball out. Lukava grabbed his hat trick minutes from the end to make the score 3-9, but Qormi grabbed their fourth goal when their mid-air shot sailed into the net right on the stoke of the final buzzer going off.

In the end, Swieqi grabbed an important three points and now prepare to take on the challenge of Pieta' Hotspurs Nordiska SS Futsal on Friday 10th November at 9.15pm at Corradino Pavilion.