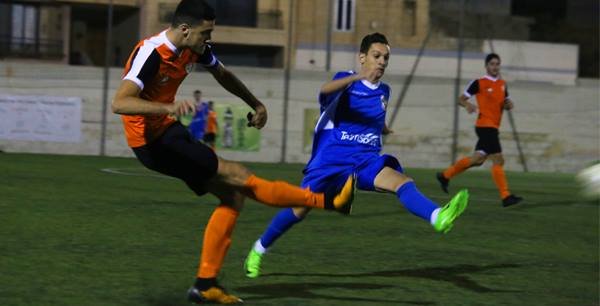 Swieqi United's U19 squad managed to edge out Naxxar in a tight and tense encounter last night at the Sirens Stadium The game was a very delicate affair and both sides fought and battled throughout the 90 minutes.

Swieqi started the brighter of the two but Naxxar started to slowly impose themselves on the game. They had a goal ruled out for handball and almost scored when they profited from a mistake committed by Dayle Borg.

In the second half, Swieqi came out all guns blazing and the introduction of Isah Doma Yusuf also proved crucial. The Orange went close when Kyle Muscat's header hit the post, while Naxxar were also dangerous from set-pieces. In the end, it took something spectacular to break the deadlock and Benji Frendo's stunning volley on 83' minutes sent the Swieqi bench into raptures!

Swieqi then managed to defend well and were immensely grateful to goalkeeper Edward Gatt for a stunning save in the final moments of the game.

The score therefore ended 1-0 to the Orange, who carry on their march at the top of the Section C standings with a perfect 21 points from 21. The team's closest challengers Tarxien are now 8 points behind with the same amount of games played.