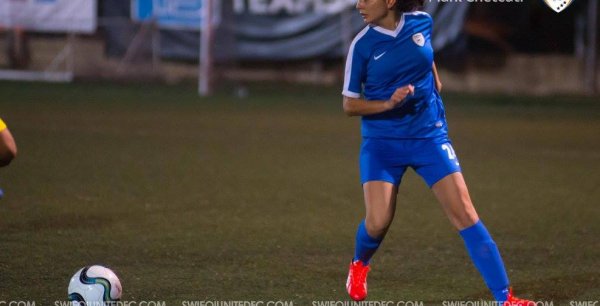 The woman’s team took on Kirkop United in their second game of the season. It was a balanced encounter, with both teams sharing possession and creating opportunities at goal. However, it was Kirkop who sealed all 3 points thanks to a 3-0 victory.

The girls battled hard and played some very good football on Tuesday night. In a tight meeting, both teams enjoyed a fair share of possession in the first half, with chances created on either side.

In the 37th minute, Kirkop were handed a free kick outside the box. Emily Pace stepped up and perfectly placed the ball in the top corner of the net to open the scoring. Swieqi kept their heads held high, and went into half time trailing by a single goal. As the second half got underway, Swieqi came out ready to fight and try turn the game around. There girls were a lot more dominant and aggressive, playing the ball around and setting up a number of chances of their own at goal.

Yolande Attard got close to giving Swieqi the draw they deserved, when she found herself in a one on one with the keeper, only to see her shot saved by the goaler. Kirkop added a second goal in the 70th minute, after Demi Margin found herself with an open shot on goal. Kirkop then ended the evening by catching a late 88th minute goal through Lis Pello, after Swieqi failed to clear their lines from a corner.

Swieqi will next take on Luxol on Tuesday 17th October at Mgarr Pitch at 8.15pm