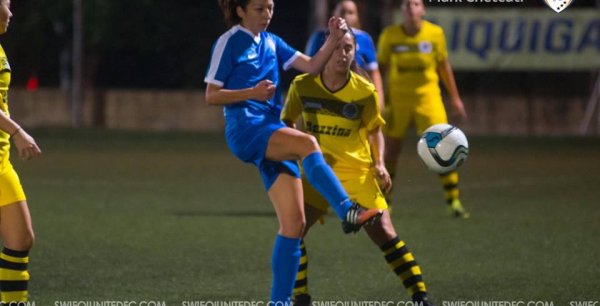 Swieqi United Women's team got their fourth season underway with a challenging first game of the season against multiple time champions Hibernians. The girls fought bravely against a very strong team, eventually losing 4-0.

It was always going to be a demanding first test for the girls, who last year were playing in the Second Division of Women’s football. Nonetheless, Swieqi proved a stubborn team to break down in the first half. Hibs enjoyed the majority of the possession, but it wasn’t until the 23rd minute that they managed to find the breakthrough, after Shona Zammit cleverly lobbed goalkeeper Daniela Farrugia to open the scoring. This goal didn’t dampen the girls’ spirits, as they endeavoured to play the ball and attempt to set up chances of their own. Swieqi hence walked off the pitch at half time with their heads held high, trailing 1-0.

It was a slightly different second half however, as fatigue began to take its toll. The girls remained composed and compact, and even found themselves shooting at goal on rare occasions. An unfortunate miscommunication in the 49th minute presented Hibs with an open goal, which Ruth Steer Chatman capitalised upon to make the score 2-0. Swieqi were unable to settle down, and a few minutes later, Hibs made it 3-0 thanks to a Jade Flask goal. Hibs added a fourth in the last 10 minutes of the game, after Francesca Chircop’s good work down the flank presented Nicole Borg with a tap in opportunity.

The girls will next face Kirkop on Tuesday 10th October at 20:15 at Zebbug Ground.