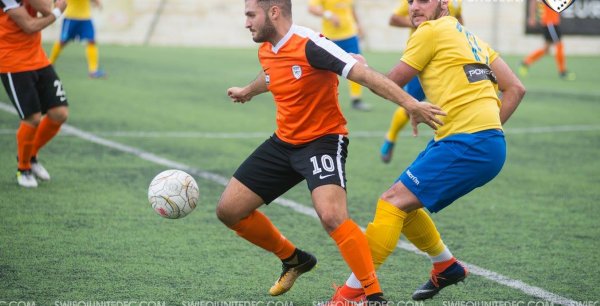 04.10.17 Our Senior Squad succumb to defeat against Santa Lucija

Swieqi United suffered their first defeat of the season as they were defeated 3-1 by a solid Santa Lucija team.

Coming from a frustrating 0-0 draw against Gharghur in their previous game, Swieqi certainly had an off-day as they failed to turn up against a Santa Lucija team that was hell bent on going top of the table.

The game was pretty evenly balanced in the first half but Santa Lucija managed to score after 39 minutes thanks to Sebastian Esquivel's curling shot. Swieqi's response was immediate as they levelled thanks to a Nicholas Schembri header on 41' minutes.

In the second half, Swieqi did not manage to press forward their psychological advantage as they conceded two goals within five minutes (71' and 76' minutes). First, Paolo Dandolo scored from close range and Esquivel made it 3-1 when he managed to lob goalkeeper Jean Debattista. There was no way back for the Orange at this point as the Southerners managed to close off the game, capping a bad day at the office for the Owls.