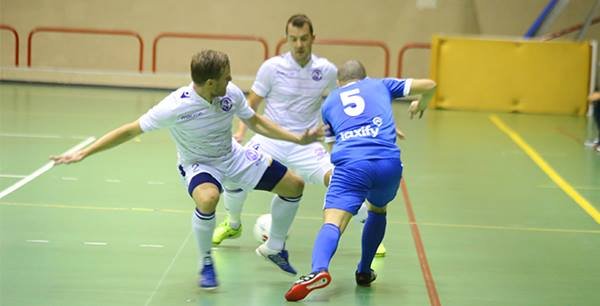 Swieqi United's Seniors Futsal commitments started off with a derby match, where Swieqi took on neighbours and current title holders Luxol at the Corradino Pavillion.

Some fresh faces have been added to Swieqi's team this season, some of which made their debut last night. Luxol tried to go ahead in the early minutes of the game, however Swieqi's custodian Jake Cippy showed off his commendable skills to keep the Violet at bay.

The match was a balanced affair. However, Luxol were the first team to score. Swieqi had numerous chances to level matters, but their finishing touches let them down, which ultimately led Luxol to take a 0-3 half time lead.

Swieqi were severely let down by some questionable referee decisions in the second half, whereby blatant fouls were not given. A controversial moment occurred when the referee harshly sent off the Swieqi custodian for alleged handball outside the box, despite Swieqi's protests. This frustrated Swieqi, who soon after conceded the fourth goal. Swieqi pulled a goal back, however they soon found themselves on the receiving end of another goal by their opponents. Luxol then wrapped up the game by adding their sixth goal towards the end of the match. At the end, Swieqi once more tried to reduce arrears, but a shot cannoned off the post.

All in all it was a good showing by the boys in blue, who definitely have potential for the season ahead.

We take this opportunity to wish Luxol Futsal the best of luck when they represent Malta in the upcoming UEFA Futsal Champions League group stage.

Swieqi next take on Mriehel on Friday 6th October at 8.30pm at Corradino.