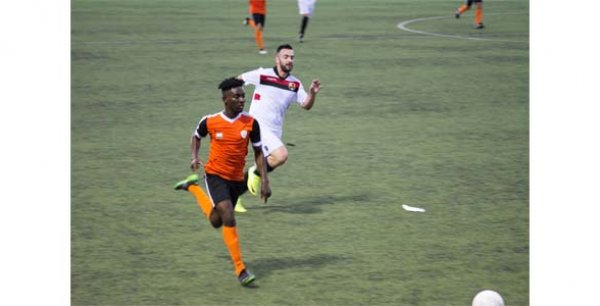 Sadat Suraka scored two goals and provided an assist to ensure that Swieqi left the Sirens Stadium with the three points against a dogged and tenacious Luqa St. Andrew's side.

The encounter was certainly much tougher than the Orange expected as Luqa were dangerous, especially throughout the first half. However, Swieqi drew first blood and took the lead after 10 minutes. Suraka broke down the right wing, skipped past two players and passed to Roderick Taliana, whose neat finish left the opposition keeper with no chance.

Luqa then began dominating proceedings and, in fairness, were unlucky not to score, spurning a number of good chances. Goalkeeper Jean Debattista was also in very good form. Just before the break, Luqa missed a great chance to level proceedings when a mix-up between Debattista and Sultana resulted in the Luqa striker shooting the ball and going agonisingly close to the empty net.

Coach Billy Mock's half-time team talk did the trick as the Orange came out a changed side in the second half. Despite some good shots at goal for the Orange, Luqa grabbed the goal they needed against the run of play, when a goal-mouth scramble following a corner resulted in the ball going over the line. 1-1, and it was all to play for.

With Swieqi missing some good chances, it was left to Suraka to grab the match-winner. His neat control from outside the box and subsequent dribble resulted in the Ghanaian striker hitting the ball with a daisy-cutter shot past the hapless goalkeeper. Deep into stoppage time, Suraka then capitalised on a goalkeeping error to make it 3-1 to the Owls.