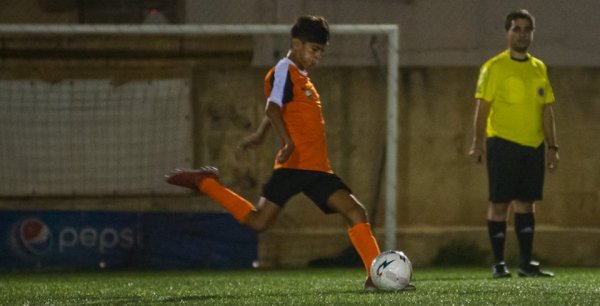 Swieqi United's U15 team started their seasonal commitments with a knock-out game against Zurrieq at the Zebbug Ground. Despite the stormy weather throughout the day, the pitch held up and was deemed to be in a playable condition.

Ten minutes into the first half, Adam Arcidiacono hit the crossbar from a corner. Five minutes later, Andrea Lorefice dribbled passed two defenders and passed it to Beppe Pullicino, who made no mistake hen one on one with the opposition goalkeeper, giving Swieqi an early lead. A few minutes before half time, the Orange had a free kick in a dangerous position which went just out wide. The first half therefore ended 1-0 for Swieqi, with the Young Owls nonetheless firmly in the ascendancy.

Swieqi started the second half on a high, as after just a few seconds Lorefice doubled the score. Five minutes later, it was Lorefice scored once again, his second of the night, to firmly put the game beyond Zurrieq. A few minutes later, Shaun Aquilina finished off the rout by scoring a wonderful free kick to seal a 4-0 victory.

Swieqi advance to the next round and face Xghajra on Thursday 21 September at 19.45 at Zebbug Ground.