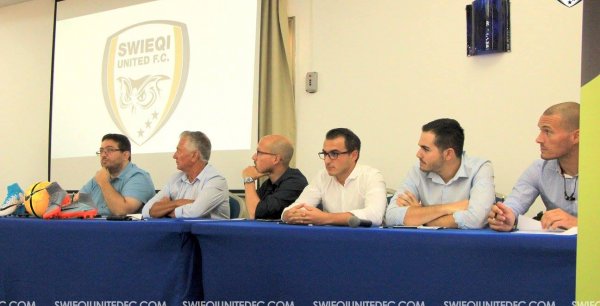 Swieqi United FC today officially launched the 2017-18 season at the Cavalieri Art Hotel, St. Julian’s, with a Business Lunch held by the club for its staff, players, corporate sponsors and guests.

President Dr Justin Fenech gave an introductory address, stating that this was the Club's ninth season. He proceeded in giving a brief overview of what the Club crest stood for when it was designed and how it has evolved over the years. He opined that the colour orange should remind members of the revolution that the Club is trying to achieve in Maltese football; how the owl should remind members of the wisdom needed to run a sustainable club; and how the three stars should stand for the principles that have distinguished the club, mainly innovation, education and community.

President Fenech also outlined the various initiatives being undertaken by the club at a technical level in order to progress, including the creation of a Club Philosophy document, the introduction of a structure for Goalkeeper coaching and development, the introduction of structure for Technical Analysis. Furthermore, he also outlined the off-the-pitch initiatives that the club shall be undertaking this season, including the launch of a club magazine, the creation of a company responsible for the business aspect of the club, and the change from amateur to semi-professional status.

Vice-President Dr Michael Calleja then took to the floor to introduce the Senior Squads for the forthcoming season. He stressed three main points, being the importance of the individual and collective development of the club’s players, the fact that new players are recruited based on the Club Philosophy, and the fact that there is a team behind the team, mainly comprised of a dedicated Executive Committee and coaching staff, that focuses on ‘character before talent’. An overview of each competing senior squad was given by the respective head coaches, namely Futsal U21 coach Kenneth Fiteni, Futsal Seniors coach Boicho Marev, Women’s Seniors coach Keith Gouder, U19 coach Rodney Bugeja and Seniors coach Billy Mock, who all outlined their aspirations for the upcoming season.

The Academy wing of the club was outlined by Head of Coaching and Youth Development, Andrea Vella. Vella stated that player and coach development at the club was critical, and also outlined six main targets in his role, being the launch of an Academy Curriculum, having a uniform style of play, having the Club Philosophy implemented throughout the club, the introduction of a terminology document, the continuous development of club staff, and the taking place of quality assurance throughout.

Vice-President Dr Robert Dingli then proceeded to give a brief overview of the administrative and management wing of the club, and said that this contributes to the development and growth of the club, both internally and externally. Dingli also pointed out that in its short history, Swieqi United had already managed to gain the respect of the various associations in Malta, hence Executive Members were being involved in reforms at all levels. Dylan Micallef then proceeded to give a brief overview of the club’s new sponsors, Jeffrick Cachia spoke about the club’s media arm, while Timothy Gingell spoke about the business wing of the club.

President Fenech and Marc Stafrace, representative for the GO Sport | Hudson Holdings in Malta, then proceeded to reveal the club’s new Nike Branded kits, which shall be used by the club’s players up to season 2019-2020.

The Season Launch was then concluded by a panel of distinguished guests, including Noel Muscat, Mayor of Swieqi, Peter Hyballa, former coach of Eerste Divisie side N.E.C. Nijmegen, and Dr Chris Bonett, former Vice-President of the MFA and current senior consultant within the Parliamentary Secretary for Youth, Sport and Voluntary Organisations, who all praised the club for its professional approach regarding the administration and day-to-day running of the club.

The Club will be adding Dr Klown to its social partners and will be promoting the Dr Klown initiative during the coming season. The Club would like to thank Cavalieri Art Hotel for hosting the event, as well as its Sponsors, mainly Global Tech, Taxify, Bit 8, Matching Visions, NM Group, Da Vinci Hospital, Logix Creative, Untangled Media, Cavalieri Art Hotel, Nike, Go Sport, Mapfre and Portughes.