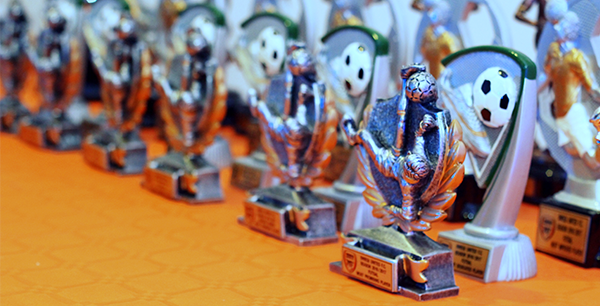 08.06.17 SUFC close off season in style with Awards Night

Swieqi United FC closed off its most successful season in its short history to date in style on Tuesday evening, with an Awards Night being hosted by the club for the players and distinguished guests.

President Justin Fenech, in his introductory address, highlighted the positives that the club experienced this year. He stressed that the Swieqi United FC community has grown exponentially and the club’s brand has become much stronger over the past season, with this being the fruit of hard work both on and off the pitch, including a strong presence on social media, with the club being the third most followed club in Malta on Facebook. He also gave a brief overview of our squads’ performances this season, saying that each squad gave its all and performed to a very high level.

President Fenech then took the opportunity to announce a new technical partnership with American sportswear giant Nike, which will see the club through to the 2019-2020 season. The announcement drew a great applause from the guests that filled the venue on the night.

Various awards were then presented to players who excelled throughout the season. The full list of winners is the following:

Furthermore, the Special Award was handed to Daniel Mifsud, team manager for the Seniors and U19 squads, the Brand Ambassador Award was handed to Seniors Squad head coach Billy Mock, while the President’s Award was handed the SUFC Media Team, for their endeavours throughout the season. Executive Committee members Jeffrick Cachia and Roderick Borg accepted the award on behalf of the team. Frederic Johannson was also awarded a special award for services rendered to the club.

Following the Awards Ceremony, a reception was held whereby food and drink was served to all guests.