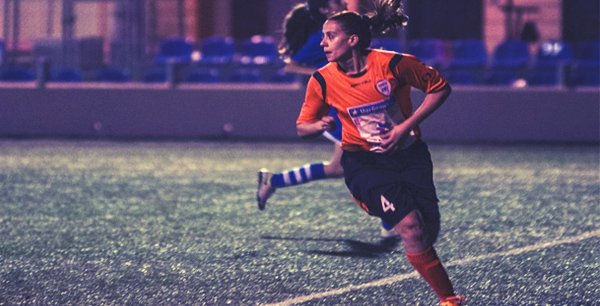 Continuing with the trend of a successful season for Swieqi United as a club, Women's team player Emma Moore was awarded with the BOV Women's Second Division Top Scorer award at the recent Malta Football Association (MFA) awards ceremony. Robert Dingli sat down with Moore to discuss this personal success.

Emma Moore impressed everybody by scoring an incredible tally of 28 goals this season, something which to her, means a lot. She is unable to describe the feeling she felt when she scored, apart from saying that it is a feeling of pure adrenaline.

From all those goals, she recounts that two goals clearly stand out from the rest - the first being her stunning half volley that she scored against Hamrun Spartans, a strike which sailed perfectly into the top corner of the Hamrun goal. This was memorable because Moore does not often score goals from outside of the box, and because of the fact that it was thanks to the great team build up that she was able to score such a spectacular goal. The second goal she remembers clearly was a header which she scored, following a corner kick - another rare instance for this team.

Moore looks back at the team meeting that was held in pre-season, whereby coach Keith Gouder said that the team had three objectives to achieve for the season: to get promoted, to get promoted as league champions and for the players to further improve themselves. She added a personal fourth objective: that of scoring as many goals as possible, which, at the time, she thought was a bit too exaggerated. She feels that to be able to not only win the league as champions but also end up with the top scorer gong for the Second Division is a remarkable achievement and one which will not be forgotten for some time to come. This was all possible thanks to a group of incredible hardworking people who all worked for the team's objectives collectively. Since the team's average age is quite a young one, Moore says that she is sure that the squad can continue to build on such success for a good number of years to come.

Although Moore was statistically the division's top scorer, she was nonetheless quick to point out that her work was just to put the ball into the back of the net. She acknowledges that she would not have been able to do this had it not been thanks to the various assists given and great team work that was shown by the ten other players on the field, who all worked together as one team.

Although Moore opted to retire from the game shortly after winning the league, rumours are still amiss that she will be donning her football boots for yet another season next year. Laughing at this question, she did not deny such rumours and, without revealing too much, said that there is still one last objective that she wishes to achieve, thus hinting that she might be back again next season. She confesses that she will miss the adrenaline rush that every game used to give her, though will certainly not miss the aches and pains that used to be painfully felt the following morning after a game. She has since started CrossFit and wishes to continue such sports in the free time that she hopes to get from not being involved in football.

Moore concluded by saying that she wishes to thank everybody who was involved in such an incredible adventure, from the Executive Committee, to the coaches, players, staff and supporters. All the support that she received certainly helped her to improve and grow as a player. For her, it was a pleasure to play and win the league with such an incredible team of champions.