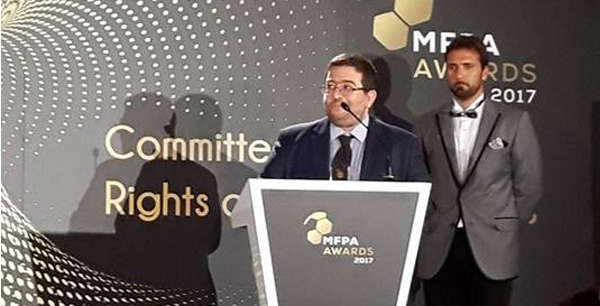 Following what has been arguably Swieqi United's best season to date, in which the club won various honours in the competitions that it competed in, the club has also been awarded two prestigious awards off the pitch.

The first award was the Malta Football Players Association (MFPA) Special Award for services rendered by Swieqi United FC to football in Malta. Such award was recognition of all the work that has been done by SUFC and the people involved in the club during its eight years of existence, an award that was probably never envisaged back in the initial early days of the club.

MFPA General Secretary Carlo Mamo described this award as symbolising a successful 'bridge' between the local association and the players' union itself. He stated that Swieqi United had publicly supported the MFPA in their bid to revise local football rules, such as lobbying for the total abolishment of the parameters system and fulfilment of all contractual obligations. Furthermore, he thanked Swieqi for continuously backing proposals which, after all, would ensure that players enjoy greater rights and freedoms.

Upon thanking the MFPA for their generosity, club president Dr Justin Fenech publicly stated that Swieqi United will continue to work with the MFPA on the most pressing issues in local football. He stated that being a new club, Swieqi could gauge the local football spectrum and analyse it from a logical and holistic point of view. Dr Fenech also stated that change is needed and pledged the club's total support in seeing certain unjust laws finally abolished.

A mere couple of days later, Swieqi United were als unexpectedly presented with the Malta Football Association (MFA) Fair Play award. Such award was in recognition of the club's holistic approach to football and by showing respect to its opponents and officials involved in the club's game. Upon collecting this award, Dr Fenech thanked the MFA and pledged the club's support to the MFA for pushing forward positive changes to football in Malta.

These two awards will, without a shadow of a doubt, continue to push the club even further to continue in its successful journey and ensure that at the same time it is helping pioneer a better football philosophy within the Maltese system and even abroad.