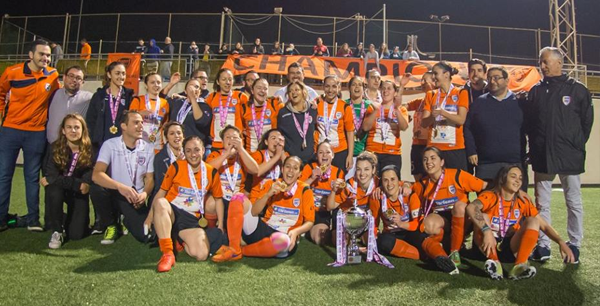 The Swieqi Women's team finished off their third season in Maltese football on a positive note last Thursday, defeating Tarxien Rainbows 2-1 and lifting the Second Division trophy in front of a sizeable crowd at Mgarr Ground.

The girls wasted no time in taking the game to their opponents and were soon in front thanks to some brilliant skill by Krista Montfort. However, the lead did not last too long as Tarxien found themselves level after a cross from the wing that somehow found its way to the top corner of Emma Grech's net.

The girls picked themselves up immediately. Having created a number of goal scoring opportunities, it was Sammy-Jo Barbara who got the all important touch following a goalmouth scramble to put the girls 2-1 up at the break.

The second half saw chances being few and far between and the game mainly being fought in midfield. Tarxien arguably came closest to tying the scores, as they could have equalised from the penalty spot but missed their spot kick by a country mile. Nevertheless, the Orange closed off their third season in Women's football with a win, much to the delight of their supporters.

Following the match, the team was also presented with the Second Division trophy, a fine reward for their endeavours throughout the season. Swieqi therefore finish the season with 15 wins and a sole defeat, and will be looking forward to Premier Division football next season.