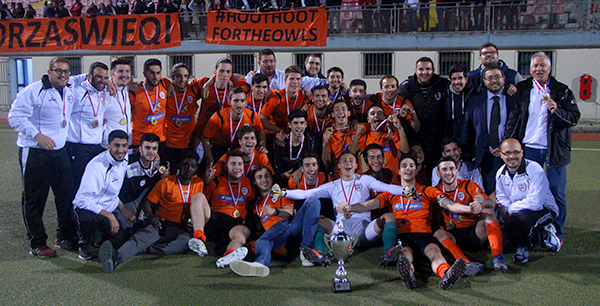 It was a brilliant night at the Centenary Stadium yesterday evening, as the young Orange were in no mood to let the Section D Championship slip away from their grasp as they promptly demolished a very good Birzebbugia team 6-0.

The contest in itself was all but over after 20 minutes. First, Nicky Schembri scored after 2 minutes with a great header from a Thomas Philip Debono free kick. Alan Schembri Wismayer then made it 2-0 a couple of minutes later after a dazzling run which cut through the heart of the B'bugia defence. Schembri then grabbed his hat-trick with two well taken goals scored in quick succession to all but seal the contest.

Birzebbugia came out all guns blazing in the second half and could have pulled one back, with only a finger-tip save by Edward Gatt denying them a way back into the contest. No sooner had Swieqi survived the onslaught, they made it 5-0 thanks to a goal from Thomas Philip Debono. Schembri Wismayer then grabbed another goal with a close-range header after a cross.

Swieqi then controlled and saw out the remainder of the game with minimal fuss. When the final whistle went, the culmination of two seasons' hard work was felt and the players and fans celebrated throughout the night. Well done to our Minors team for such a commanding performance and Championship win! Forza Swieqi!