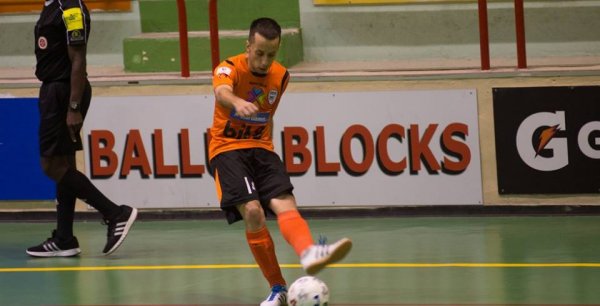 14.04.17 Futsal: Swieqi battle it out against the Spartans

Swieqi United and Hamrun Tre Angeli faced each other in another game from the Elite round of the Futsal league last night. Both sets of teams had key players absent from their squads due to injuries or suspensions.

In the early proceedings, Swieqi were caught off guard, with Hamrun quickly moving into a comfortable two goal lead, both goals coming from rapid counter attacks by the men in black and red.

As the game wore on, Swieqi began to settle more into the game and deserved to pull at least a goal back; however, Hamrun's goalkeeper was in fine form and produced numerous stunning saves to keep his team ahead heading into the break.

Swieqi came out for the second half looking to immediately pull a goal back, and their efforts were quickly rewarded when some great team work led to Redeemer Borg reducing the deficit to 2-1. Buoyed by this early goal, Swieqi kept on searching for the equaliser, which eventually came from a lovely long shot that found the head of the unmarked Bobo Marev.

With the score 2-2, Swieqi were causing all sorts of trouble for Hamrun. Unfortunately though, Swieqi's best efforts crumbled when Hamrun regained the lead against the run of play, which then led a fourth goal from Hamrun.

Though clearly heartbroken, Swieqi refused to throw in the towel and Hamrun's custodian was yet again in outstanding form to deny Swieqi on numerous attempts. Hamrun then added a fifth goal to give themselves a comfortable lead and ultimately secure the three points at stake.

Swieqi next face UOM Knights on Friday 28th April at 9.15pm, whereby a win for Swieqi could possibly guarantee their place in the playoffs for the league title.