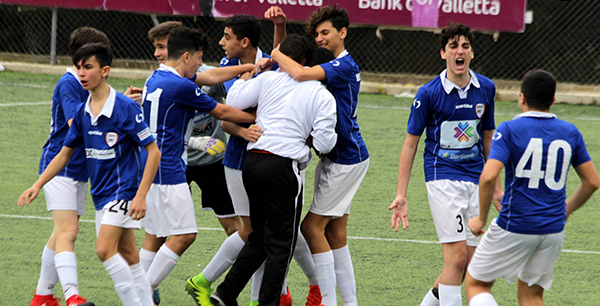 Swieqi U17s faced Fgura on Sunday 2nd April in their last league game of the year, knowing that a point would be enough to secure a place in next year’s group stages.

Buoyed by the knowledge that Lija/Iklin lost their match and therefore the ball was firmly in their own court, Swieqi took to the field confidently, looking to put their opponents to the sword early on in the match. This confidence paid off, as the Young Owls took the lead early in the first half, as after ten minutes Raul Mackay put the ball in the back in the net. Ten minutes later, a great free kick from Isaac Camilleri into the box saw Emilio Edwards connect well with his head and put it into the back of the net to double the lead for Swieqi. It was Edwards' first goal of the season.

Despite the comfortable lead, Fgura did their utmost to pull one back before half time, with a particularly dangerous action being a free kick awarded on the edge of the Swieqi box, which was well saved by goalkeeper Kiril Petrovski. Nonetheless, the first half ended 2-0 for Swieqi.

The second half continued in the same pattern as the latter part of the first, with Fgura pressing hard to get back into the game. Nevertheless, the Swieqi defence remained strong and resolute, despite this pressure. The Orange eventually made sure of the points as Jake Chetcuti dribbled around the opposition goalkeeper just moments after just coming onto the pitch to make it 3-0. A few minutes before the end of the game though, Fgura scored a consolation goal, but it was too little too late. The game therefore ended 3-1 to Swieqi.

With this result, Swieqi U17s finished in fourth place in Section C and secured a place in next year’s group stages.