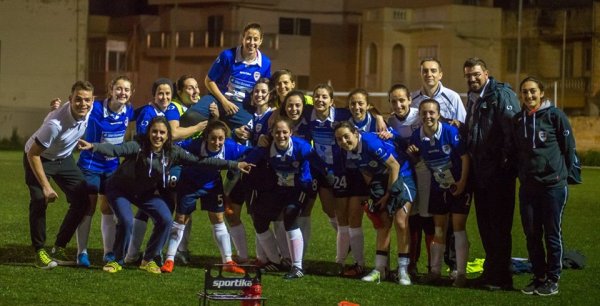 Swieqi United took on Kirkop United Team B on Tuesday night in their 14th league game of the season, looking to extend their perfect record. The women in blue took their time to settle down but managed to produce a wonderful display, beating Kirkop B 8-1.

League top scorer Emma Moore was once again on the scoresheet and opened the score with a nice shot, putting Swieqi United 1-0 in front early on in the game. However, a few minutes later, Kirkop B produced a very fast attack and managed to equalise on the 13 minute mark. The women in blue controlled the situation perfectly by consistently creating very good chances. Rebecca Naudi took a short corner and laid it off to Yolande Attard, who managed to shoot quickly, beating the goalkeeper to put Swieqi in front once again. Sammy Jo Barbara then got her name on the scoresheet when she scored from a beautiful shot taken from outside the box. Rebecca Naudi then added another to make it 4-1 at the break.

Swieqi picked up from where they left off and began the second half on a high, further increasing their advantage thanks to a beautiful lob over the keeper from Emma Moore. After a good display, Krista Montfort managed to put her name on the score sheet as well, after finding herself one on one versus the keeper and placing the ball perfectly into the back of net. Moore then completed yet another hat trick to make it 7-1, and finally, Kate Galea sealed the deal for the newly crowned Second Division champions with a wonderful free kick from the left hand side.