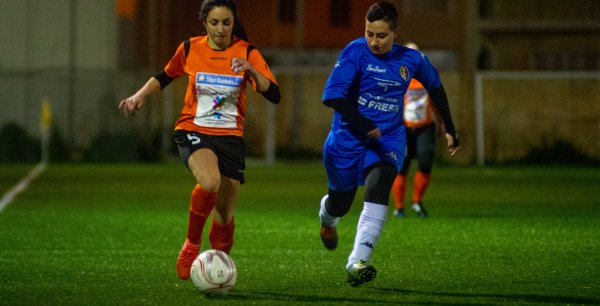 Swieqi United took on Ħamrun on Tuesday night in their 13th league game of the season. Once again, the women in orange easily defeated Ħamrun, this time by the tune of five goals to nil. Since Mosta drew their last game, Swieqi United were declared champions and by beating Ħamrun, they continued extending their winning streak in the league this season.

The women in orange got off to a good start and found the net in the opening minutes. Emma Moore received a good ball from Krista Montfort and dribbled past the goaler to put Swieqi 1-0 up. In the 33rd minute, Ħamrun’s goaler made a good save but the ball ended up at the feet of Amy Galea Gingell, who, with a powerful shot scored the second goal for Swieqi. The first half therefore ended 2-0 for the women in orange.

In the second half Swieqi continued to dominate and Emma Moore scored two more goals, again being assisted by Krista Montfort. In the last 10 minutes, supersub Daniela Maggi made the score 5-0 after she found the net just after 3 minutes on the pitch.

After defeating Ħamrun, Swieqi United now find themselves 12 points ahead of 2nd placed Mosta and still with a perfect record in the league.

Swieqi United now face Kirkop Team B on the 21st of March at 20:15 at Żebbuġ Ground.