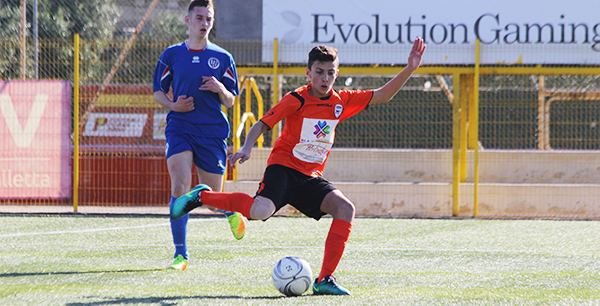 Swieqi U17s faced Tarxien at the Luxol Ground on Sunday 12th March looking to continue their fine form and upward trajectory in 2017, having collected ten points out of a possible fifteen.

Despite this, Tarxien proved to be too strong for the young Swieqi players throughout the course of proceedings. Indeed, Swieqi were always chasing the result, as Tarxien took the lead after just two minutes of play. While Swieqi tried to react immediately, and had chances to equalise, the Tarxien defence remained strong and resolute. In the last few minutes of the first half, Tarxien then doubled their lead from the penalty spot, to go into 2-0 up at the break.

Swieqi kept on chasing the game in the second half, in the hope that they could overturn the result. However, it was late in the day that Swieqi pulled one back, as Matthias Sultana, who had just entered the pitch, scored a header from a corner. Despite their best efforts to find an equalising goal, this was not to be, and therefore, the final score was 2-1 to the Rainbows.

Swieqi will now aim to bounce back from this setback in a crucial fixture against Zejtun on Sunday 26 March at 11.00am at the Rabat Ground.