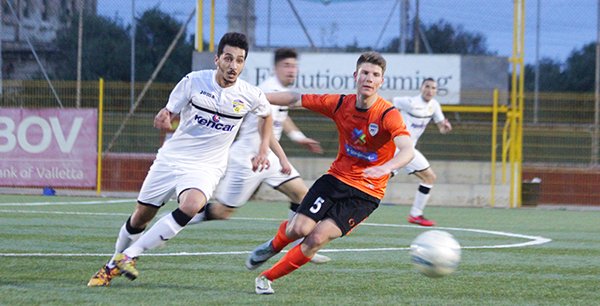 With Swieqi United's injury-hit squad already in serious difficulty, with notable absentees including Roderick Taliana, Luke Scicluna, Benji Frendo, Jordan Coleiro and Sam Bartolo, the team suffered a further setback right before kick-off when Matthew Laferla, Dean Grech and Nicholas Schembri had to pull out of the squad.
A mere 10 minutes before kick-off, Thomas Camilleri was also forced out of the squad due to an injury picked up during warming-up, leaving the coaching staff with very little options and a ravaged bench. 18 year old Benjamin Giles then made his full debut for the seniors team as did Jon David Ferry - both playing as midfielders.

In fairness, the brave and inexperienced Orange did very well in the first half playing some neat football and going close on a couple of occasions. When San Gwann scored on 27' minutes through Jan Tanti, Swieqi reacted positively and won a penalty when the San Gwann goalkeeper fouled Dylan Gouder. Glendon Refalo then converted the spot-kick. Both teams entered the dressing room at 1-1.

In the second half, San Gwann's experience and quality began to pay dividends. The Orange conceded a penalty after Pierre Muscat handled the ball in the box and Abeeb Williams duly converted on 51' mins. Sergio Hili then scored a hat-trick on 67', '69' and 74' to cap a poor second half showing by the Owls. Nikolai Dimech was then brought on late in the second half - ensuring another Minors player made his full debut. The Orange will now be looking to bounce back quickly to erase this painful memory.