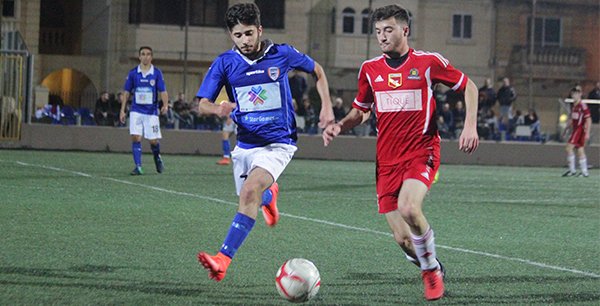 It could have gone either way but in the end, Melita's two goals saw off a determined and plucky Swieqi in the Quarter-finals of the Youth Knock-Out.

Swieqi United went into this game buoyed by the fact that they had reached the Quarter-final stages of this competition for the first time in their short history. The first half was thoroughly entertaining with both sides exchanging good passages of play, and both sides coming close on several occasions. Nonetheless, it was mainly a midfield battle that was fought between the two sides - with the first half ending 0-0 and the game still finely in the balance.

The game really came to life in the second half. Ten minutes in, Melita were awarded a penalty after a foul committed by Benji Frendo in the box. The resultant spot-kick was instantly dispatched. A few minutes later, Melita doubled their score from a header after a well taken corner.

Despite now facing a monumental task ahead of them, the Owls were in no mood to lie down and Jon David Ferry's inch perfect free kick found the back of the Melita net to ensure the last 15 minutes would be a nail-biting encounter. Swieqi went mightily close on several occasions, with the best chance falling for Sadat Suraka, whose shot was blocked from close range. The Reds held on to record a win but Swieqi left the game with their heads held high after giving their all in a great and absorbing 90 minutes.