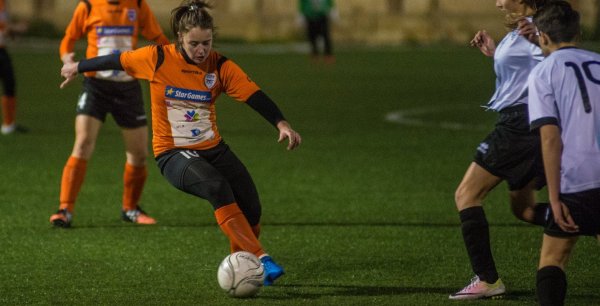 Swieqi took on Tarxien on Tuesday night in their 12th league game of the season. It was a tight encounter which saw the girls having to dig deep to come from behind and eventually secure victory with the narrowest of leads.

Swieqi had an abnormally slow start to the game, taking a while to settle. Tarxien took full advantage of this and found themselves 1-0 up when Swieqi failed to clear their lines from a corner. Nevertheless, the girls bounced back within a matter of minutes when Becky Naudi set up Kate Galea just outside the box. Her long range effort found its way into the back of the net, thereby settling some nerves down.

As ever, Swieqi pushed on and endevoured to create chance after chance. Their efforts paid off just before half time when Emma Moore’s brilliant run down the line set up Becky Naudi for a neat finish. The girls therefore led 2-1 at the break.

The second half was a different story entirely, seeing the ball played mostly in the midfield, with neither side managing any real lethal attack. Swieqi managed to hold on to their lead and see the game through, thereby extending their unbeaten run to 13 competitive games this season and leaving them just one league win away from top flight football next season.

The girls will next take on Kirkop A in the Knock-out competition on Tuesday 28th February, at 6.30pm, Mgarr Ground.