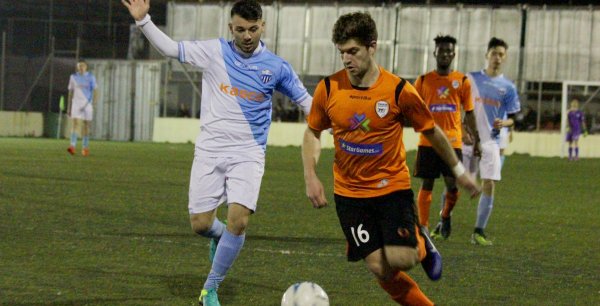 Buoyed by their recent last-gasp win against Mqabba, Swieqi United faced Bormla at the Zabbar ground knowing a win against a tough outfit would certainly aid in their promotion challenge.

The first half produced a solid display from Swieqi, who should have gone ahead, but Benji Frendo's header was adjudged to have not crossed the line. Swieqi then forged ahead thanks to Nicky Schembri's free kick, which totally deceived the St. George's keeper. Schembri then added a second with a low shot from outside the box and a completed a first half hat trick when he turned and lobbed the ball over the hapless St. George's keeper. Despite being outclassed, St. George's nonetheless did produce some good chances and their best opportunity was a powerful shot which hit the post. The first half therefore ended 3-0 to the Orange.

Swieqi continued where they left off in the second half. Jon David Ferry's beautiful curler made it 4-0 before St. George's pulled a goal back after some hesitation by the Swieqi rear guard. Thankfully, man-of-the-match Schembri grabbed his fourth of the match and made it 5-1 when he latched on a rebound to ensure a comfortable ending for the men in Orange.

The team next face Melita in the Youth Knock Out quarter-finals at the Charles Abela Stadium, Mosta, on March 1 at 20:15.