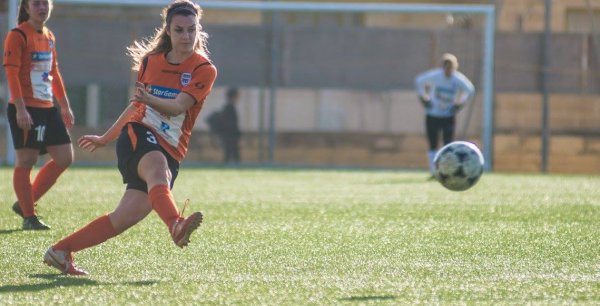 Swieqi took on Mosta in their 11th game of the season, knowing that a win would all but secure automatic promotion to the First Division next season and put them 11 points clear at the top of the table. The match was an entertaining affair, with Swieqi managing to record an impressive 3-1 victory.

In a battle between first and second place, Swieqi got off to a flying start in the first half. Having created a couple of chances early on, Becky Naudi opened the scoring on the half hour mark with a solo effort when her shot found the bottom corner of the net. This goal settled the team, and it wasn’t long before they got their second when Becky Naudi turned provider for Emma Moore, who confidently slotted the ball under the Mosta goalkeeper. Just before half time, the girls made it 3-0 when a well-taken shot from Yolande Attard crept into the bottom corner of the net.

Despite this lead, Swieqi continued to attack and create chances in the second half. The girls were unlucky to concede a goal late on following a well worked free kick action by Mosta, but nonetheless, they held on to record an important victory which now confirms the girls' status as favourites for promotion. Provided Mosta win all their remaining games, five points from the last five games will suffice for the team to mathematically secure its status as Second Division champions.

Swieqi next take on Tarxien on Tuesday 21st February at 8.15pm at the Zebbug ground.