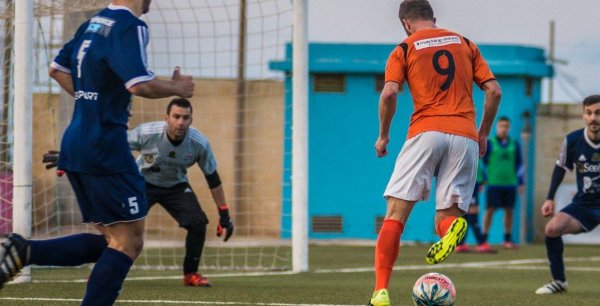 13.02.17 Seniors: First Half Blitz Enough to see off Mellieha

​Swieqi United continued their recent good form, scoring two goals in the first 9 minutes of the game to see off Mellieha at the Centenary Stadium.

No sooner had the game started, Swieqi United won a corner and from the ensuing goalmouth scramble, Ion-Alin Margarit made it 1-0. Seven minutes later, Swieqi added a second through Jordan Farrugia Coleiro, who beat a couple of players before shooting past the hapless Mellieha keeper from a tight angle. On 30 minutes, Margarit's great lob from outside the box effectively secured the three points for the Orange, with Swieqi comprehensively seeing out the first half in a professional manner.

Nine minutes into the second half, a great interception by Luke Scicluna allowed Roderick Taliana and Alan Schembri Wismayer to play in Kenneth Ekezie, who scored from close range. From thereon in, the result of this contest was never in doubt as Swieqi then played a possession game to see off the Northerners.

With the result, Swieqi remain 6th in the table, two points behind Birzebbugia and one ahead of Siggiewi. The next game is up against 2nd placed Zabbar St. Patrick, whose 11 game winning streak came to a halt this weekend, on the 25th February.