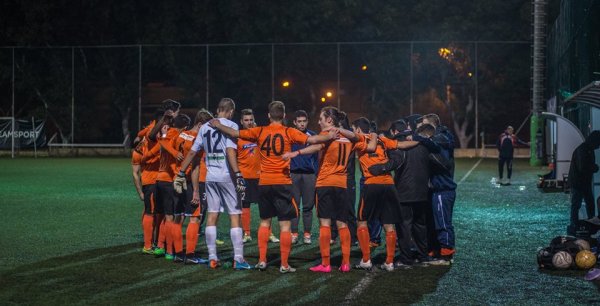 With everybody at Swieqi United FC excited and looking forward towards the upcoming Youth Knock Out Quarter-Final draw, the club’s media team sat down with U19 Head coach Rodney Bugeja and his assistant Gilbert Micallef, together with team captains Benji Frendo and Thomas Camilleri to hear their remarkable journey in reaching a club historic QF appearance as well as the secrets behind the rise of the team.

All four are quick to remark that a key component to the success being enjoyed by the squad is the great relationship that has been fostered and built between the coaches and the players, both on and off the pitch, which ensures that there is a relationship of trust between everybody. Benji Frendo in fact even states that he calls the team his 'second family' and has relied on them for advice, with Thomas Camilleri adding that the players stick up for each other and support each other throughout.

Coach Gilbert recalled his first stint with the club three years ago when he was assisting coach Andrea Vella with the U17 team, who at that time were the only SUFC academy team competing in the youth competitions. Micallef recalls clearly that coach Vella kept on hammering home the point to play good football, no matter the result. Such philosophy is shared by Coach Rodney, who believes that the main aim is to develop good players for the club’s seniors squad, with results coming second in terms of priorities. Micallef adds that the team's target from day one was to always help out players understand the game better.

This philosophy has clearly paid dividends this season, where a total of 19 minors players have played for the Senior squad so far. This has been possible thanks to the coaching link that the club adopts through its one club one team philosophy, whereby coaches oversee two squads and ensure that promising players get their chance to break into a higher level. Seniors Head Coach Billy Mock is present at every U-19 match, carefully watching and analysing players and calling up a number of them to the main roster, some of whom have established their place in the starting XI. Coach Gilbert holds this down to the smooth link that exists between the academy levels and minors levels, which is a blessing for SUFC and is something that the most of the other football clubs in Malta cannot boast about. For Micallef, such experience is beneficial to the U19 squad as a whole, as players are being exposed to a greater amount of experience, which is then subsequently shared with their teammates, for the team to improve and strengthen as a whole. Coach Rodney still has the Seniors league game vs. Qrendi, who are in the running for this year's MFA BOV Second Division title, fresh in his mind. He said that since the seniors squad was heavily depleted due to injuries, absences and illness, and the coaches were left with no option but to draft in 14 minors players to the match squad. Finding themselves 3-0 down after 30 minutes, he feared the worse. However, the players refused to throw in the towel and fought till the last second to earn a prestigious 4-4 draw.

With Coach Rodney being at the helm of the U19 squad for the past two seasons, he has overseen a great improvement in the squad of players, so much so that today he finds it hard to select his match day squad and inform those unlucky ones who, despite their hard efforts and dedication in training, would not form part of the match squad.

While both Thomas and Benji admit that they were both nervous when they earned their first Seniors squad call up, they are thankful for the great reception that they received from the Seniors players, who quickly welcomed them into the team and ensured that they felt at ease. Both admit that this has led to them feeling more confident in their game and has led them to improve their skills as players and as leaders when they wear the captain’s armband.

Both coaches admit that for them it is not a surprise that Swieqi’s Minors team has managed to reach the QF of the Youth Knock Out competition for the first time, while in the process beating more experienced competitors. As Coach Rodney explains, thanks to the fantastic team spirit within the team, the boys work hard and show their true potential, and as a result, anything is possible.

Coach Rodney also heaped praise on the club which, this season, owing to the large number of U19 players that it had on its books, opted to create further teams in order to afford such players competitive football. As a result, the birth of a squad that participated in the IASC League, as well as the Futsal U21 Squad, which is participating in the FMA Futsal League along with Malta’s elite Futsal teams, came about. Bugeja hails this as a key asset of the club, whereby players who have the skill but are lacking playing time are still given the chance to ply their trade instead of being shown the backdoor or totally forgotten about by the club.

As a final question, we asked all four individuals who would they like to face in the QF draw. While nobody picked a definite team, all four said that they were eagerly looking forward to the draw against teams that are, on paper, superior competition. As Coach Micallef said, the mere fact that the team will be facing more quoted teams fuels the boys with further motivation to prove themselves and continue to show the club’s progression. Who knows, the team could even continue making further club history. As Sir Alex Ferguson famously said, “Football. Bloody hell!”

The Youth Knock Out Draw for the Quarter-Finals will be taking place on Monday 13th February at 5pm.