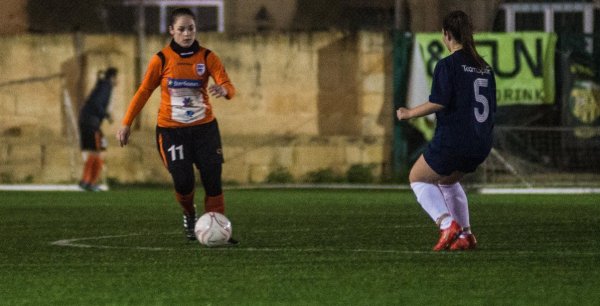 Ruthless Swieqi took another important step in fulfilling their title objectives on Tuesday, as they easily disposed of Kirkop B in an eight goal thriller.

As the girls have done many a time this season, they wasted no time to get the ball at the back of the net. Yolande Attard opened the scoring in the 1st minute, tapping home from an Emma Moore cross. It wasn't long before Moore also got her name on the score sheet, scoring twice in the first half, as the girls headed to the dressing room with a 3-0 lead.

Throughout the second half, Swieqi’s defence was once again solid, in their pursuit of recording another clean sheet. This allowed the girls to attack during the majority of the game. Emma Moore got her hat trick while Yolande Attard grabbed her second of the night to make the score 5-0. Amy Galea Gingell also featured among the goal scorers after two very well taken shots landed in the back of the Kirkop B net.

The game marks Swieqi’s tenth consecutive win and leaves them with a comfortable 8 point lead at the top of the standings. The girls will next face Mosta on Tuesday 14th February at 8.15 Mgarr ground. A win there will take them 11 points clear and needing just one more win to secure the title and automatic promotion to the top flight.