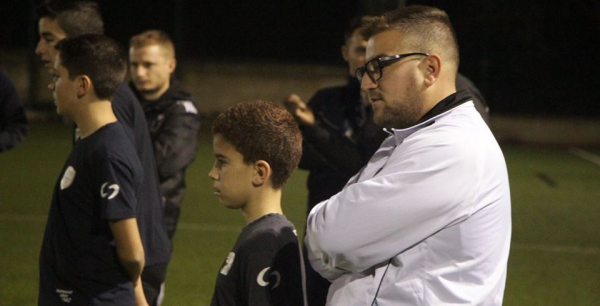 Meet Gilbert Micallef, Swieqi United's Under 15 team Head Coach and Under 19 team Assistant Coach. Despite being relatively young, Micallef has already endeared himself amongst the Swieqi United coaching team as a determined, resourceful and shrewd manager.

Swieqi United's Media Team sat down and had a chat with Micallef to discuss the season's ongoings to date.

1) You are coaching Swieqi United's Under 15's in their maiden league campaign. What is your overall assessment of the season so far?

GM: Well, if results are anything to go by, I would say the season is going superbly as we are currently first in our section. However, at this age, results take a secondary role. Our focus at this age is the constant development of our youth players. Session after session, we help our players get used to playing 11-a-side football and start preparing them for the years to come.

2) The group has earned some very positive results after a difficult start. What do you attribute this change in fortune to?

GM: Pre-season and beginning of the season were very difficult for us as we were trying to play football and not just 'kick and hope for the best', like some other teams do. It is no easy task keeping 13/14 year olds motivated when results do not go your way. This process takes time, but, backed by the club, we continued with our philosophy which eventually reaped its benefits.

3) How is this group different to other groups you have previously coached?

GM: I have coached a few teams in my career and I would say that this team stands out for the constant desire to always learn more. Also, their love for the game makes them give their 200% in every game.

4) Some people are not aware of the sacrifices undertaken on a constant basis by youth coaches. Can you briefly explain what a typical week throughout the season involves for you and your team?

GM: We train four times weekly and every session needs its own preparation time, be it a completely new session or a repetition of a previous one. I also assist the U-19s team, meaning that part of my time is dedicated to that team as well.

Apart from the preparation for the sessions, there is tactical preparation for games which also takes up time, alongside the relevant planning of logistics with the team manager. Unfortunately though, there are only fifteen official matches throughout the season, which are not enough to give the necessary playing time to all the players in the squad.

This means that whenever we do not have a league game, our target is to play as many friendlies as possible in order to give as much playing time to everyone as possible. Until December 2016, we trained for a total of twenty-four weeks and played a total of twenty-five games between the league, the cup and friendlies (nine of which were league or cup games). This means that we have managed to play at least one match per week throughout the season so far, which is very good.

5) Finally, what are your hopes and expectations for this particular age group?

GM: As said before, our aim is to always help in the development of our players. I hope that the good structure and philosophy currently in place at Swieqi does not change so that in the years to come our players can keep on enjoying the beautiful game and be part of the senior teams.

Thanks Gilbert, and all the best for the rest of the season!