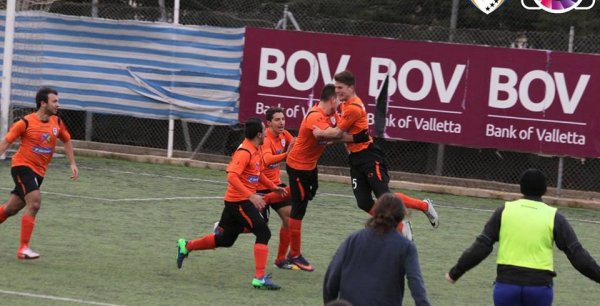 Swieqi's seniors team started off their second round commitments with an emphatic 6-0 trashing of Attard last night at Luxol Ground.

After beating Attard in the first round but then losing the three points in a protest filed by Attard, Swieqi were all out to prove themselves.
The game began in an even affair, with both teams managing to control proceedings without any concern. Swieqi began to grow in confidence and had a number of chances that went begging. This led to Mock and his assistant Bugeja deciding to chance tactics mid way through the second half.
Their gamble paid off when Roderick Taliana received a lovely through ball to beat the Attard custodian and put Swieqi in a deserved 1-0 lead. Nicky Schembri was unlucky to see his powerful shot saved spectacularly by the Attard keeper, however from the resulting corner Schembri rose highest to head the ball into the back of the net.
Swieqi entered the second half with a comfortable 2-0 lead.
Attard tried to trouble Swieqi with the start of the second half, with their coach making a half time attacking substitution. However this appeared to back fire for Attard since they found themselves on the receiving end of countless counter attacks by Swieqi. Swieqi's youthful pace was too much to handle for the Northerners.
Kenneth Ekezie added a further goal to Swieqi's cushion when he finished off a spectacular effort to make the scoreline 3-0. Suraka Sadat, making his debut with the team, added the team's fourth goal when his quick pace left Attard's defence frantically trying to catch up with him.This was soon followed by Ekezie's second goal to put Swieqi 5-0 ahead after a scramble in Attard's box.
Jordan Coleiro continued the scoring spree for Swieqi when he netted the team's sixth and final goal for the vening just before the end of the first half, leaving Attard desperately wanting to hear the final whistle from the referee.
This was indeed a remarkable performance by the boys in blue, with the seniors team registering its second biggest victory and its biggest victory in second division.
The team next take on Gudja United on Saturday 21st January at 2pm at Sirens Ground