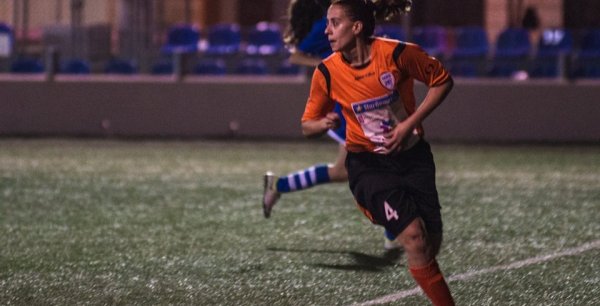 Swieqi took on Tarxien Rainbows in their first game of the new year. Despite the aggressive rain and windy conditions, the girls kept their composure to come away with a 5-0 victory.

With torrential rain and blasting winds the girls in orange enjoyed the majority of possession during the first half and despite some decent build up, struggled in the final third of the pitch. It was Kate Galea who finally broke the deadlock after 25 minutes of play when her long range effort bounced right over the keeper to open the score for Swieqi. Moments later, Emma Moore got her name on the score sheet after a strong run found her lobbing the ball over the goaler.

Swieqi wasted no time during the second half to keep the pressure on Tarxien. Following a hands ball in the box, Becky Naudi stepped up and converted a penalty to make the score 3-0. Not long after, Sammy Jo Barbara added a forth, as her long range shot found its way into the top corner of the net. Maria Rosaria Cardona also managed to get her name on the score sheet and scored her first goal for the club after some good footwork landed her shot at the back of the net.

Swieqi next take on Hamrun Spartans on the 24th January at 20:15, Mgarr Ground.