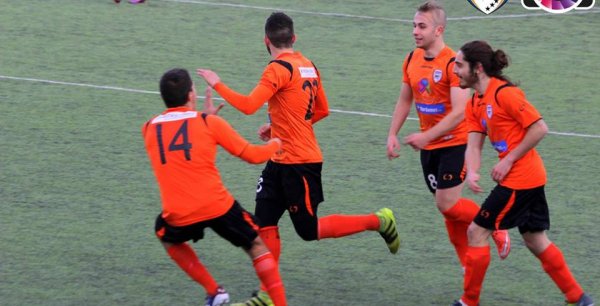 The seniors squad started off the year 2017 with a match from the BOV second division league played in freezing and windy conditions at Sirens Ground.

Missing a number of players due to injuries and personal commitments, coach Mock and his assistant Bugeja called up a number of players who form part of the minors squad to their 18 man squad. Swieqi faced further problems before kick off when a coaching decision saw Steven Camilleri replace Kenneth Ekezie in the starting eleven. During warm up, keeper Bartolo pulled up with an injury, forcing the coaches to replace him with minors goalkeeper Edward Gatt, making his official league debut for the team after ironically debuting for the seniors squad in the FA Trophy 3rd round vs. the same team!
With the wind against them, Swieqi got off to a horrible start conceding early in the game after a defensive mishap. Qrendi's goal fulled the opponents with more belief and they quickly sailed into a comfortable 0-3 lead. The men in orange did  not let the scoreline effect their minds and instead continued with their game plan. However they could not turn their possession into goals and Qrendi's defence were hardly troubled.
Things changed just before half time when Swieqi had a corner which was taken shortly and the ball fell at the feet of Sean Gatt Baldacchino whose first timer was planted beautifully in the top corner to claw back a well deserved goal for Swieqi. Swieqi headed into half time with their heads held high and coach Billy's halftime talk was simple; either keep on pressing or just give up!
The players took on Billy's advice and pressed Qrendi deep in their own half throughout the second half. Their efforts were rewarded when Gatt Baldacchino added his second goal which filled Swieqi with further belief.
Pierre Muscat, making his official seniors debut, was replaced by Kenneth Ekezie to give the squad further depth in attack. The oranges pressed Qrendi hard and were unlucky not to have their efforts turned into a goal or two. It appeared that Swieqi's hearts were broken when Qrendi managed to add a fourth goal against the run of play. However, Swieqi had other plans and immediately resumed their assault on Qrendi's goal area. Their efforts were rewarded when Roderick Taliana burst into attack and cooly beat the Qrendi keeper to narrow the score 3-4.
With four minutes injury time nearly up, Swieqi sprung into yet another fast counter attack and Kyle Muscat was in the right place at the right time to slot the ball into the back of the net and earn Swieqi a well deserved equalizer and point, leaving Qrendi stunned like a dear in headlights. This goal led to the Swieqi bench and fans into a well deserved celebration and well worth battling the weather elements that graced them!
Swieqi's Seniors next take on Attard FC on Friday 13th January at 7.30pm at Luxol Stadium.
Photo credits: Jeffrick Cachia
Match Report: Robert Dingli
< Back to News