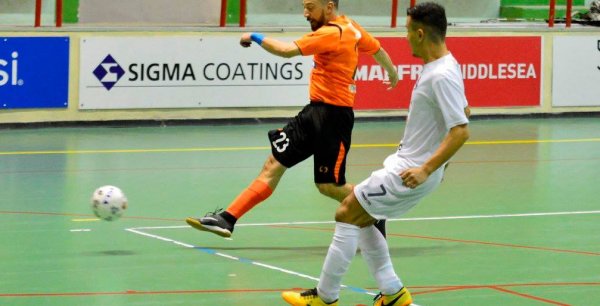 After ending 2016 with four wins out of four, Swieqi Futsal Seniors took on Sliema Wanderers in the first official game of 2017 for the club.

Expecting a tougher challenge from previous games played, coach Bobo and his assistant Nikolai urged their players to be cautious. Within 3 minutes of the opening first half Swieqi built up a comfortable 0-3 lead, with the goals coming from a double by Jason Gauci and a stunning shot from far out from Bobo. From this moment onwards it was one way traffic for Swieqi, with Sliema not offering any reply to Swieqi's pace and game plan. Bobo blasted into the net his second of the night midway through the first half. Swieqi were awarded a penalty soon after, however Timmy Gingell saw his effort saved by the Sliema custodian. However Gingell did manage to get on the score sheet a minute later by slotting the ball into the net from a tight angle.
Bobo grabbed his hat trick 5 minutes from time when another blast from him gave the Sliema keeper no chance. Andre Cianco gave Swieqi a 0-7 lead at half time when he slotted in from the side after some great skill shown by him.
Swieqi appeared to have taken their foot off the accelerator in the second half but still managed to dominate proceedings, leaving Sliema wondering how much damage would be inflicted upon them. Fred added Swieqi's 8th goal of the evening and this was quickly followed by Bobo's poker with a beautiful goal that appeared to drop down from the air and into the back of the net.
Swieqi kept on hammering on Sliema's door, but either the post, a defenders limb or the goalkeeper kept the scoreline unchanged. Sliema tried to respond towards the end of the second half, opting to use the flying keeper tactic. However James Attard, who replaced captain Balzan in goal for the last few minutes of the game, made two stunning saves to preserve Swieqi's clean sheet.
Wizu added his name to the score sheet 3 minutes from time, catching the Sliema goalkeeper way out of his box. Sliema grabbed a consolation goal seconds from time, but it was Redeemer who ended the match with his goal making the final score 1-11 in Swieqi's favour.
With this victory, the team occupy joint first place and ensured that they made it five wins out of five games played.
Swieqi Futsal Seniors next take on Hamrun on the 16th January at 8pm at Corradino Pavilion.