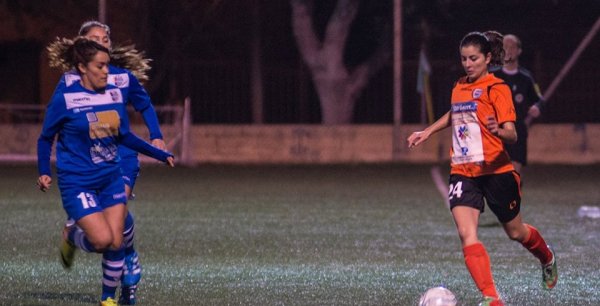 On a Tuesday evening Swieqi United faced Mosta to try to increase the gap of points while maintaining their unbeaten run. The women in orange managed to do so but they had to work harder than usual.

In the opening minutes of the first half, for the very first time it was Mosta who took the lead. Mosta managed to play nicely for a few minutes but the women in orange responded well with a number of dangerous attacks. In fact Swieqi United managed to draw thanks to our top scorer Emma Moore and the first half ended on level terms.

In the second half it was Swieqi that managed to control the game and yet again Emma Moore managed to grab her second goal in the game to give the orange the lead. Few minutes after, Swieqi United were given a freekick in a dangerous position and our freekick specialist Kate Galea managed to score a wonderful goal to put Swieqi in a comfortable position. In reality, Swieqi were never safe since Mosta never gave up and kept pushing until a beautiful shot from outside the box was scored for Mosta. However, few minutes were left and it was enough for Swieqi United to gain all points!

Swieqi United next play Gozo in the Knockout on the 13th December at 14:00 at Mgarr Ground.