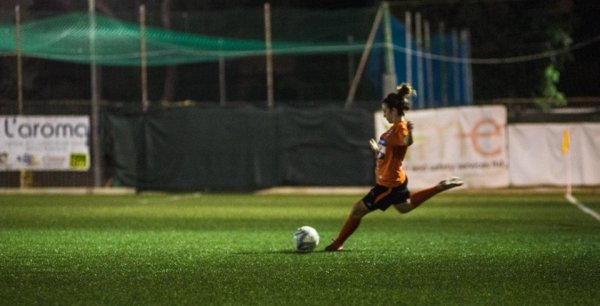 Swieqi United took on Mosta for their third game of the season on Tuesday evening. It was an intense and exciting encounter, which was very different to Swieqi’s previous two games of the season.

With both teams enjoying time with the ball, it was the women in Orange who were more critical in front of goal, eventually closing off the game 3-0. Being a top-of-the-table-clash, this game had the intensity of just that, with neither team wanting to make the first mistake. It was Swieqi who broke the deadlock after 23 minutes of play when Emma Moore was on the receiving end of a true ball from Rebecca Naudi and confidently smashed the ball at the back of the Mosta goal. The girls continued to attack, creating several chances during the first half.

Kate Galea had two of her freekicks brilliantly saved by the Mosta goalkeeper while another one hitting the crossbar. Shortly after the break, Amy Galea Gingell doubled the lead for Swieqi after her shot from outside the box ended up in the top corner of the net. In the final minutes of the game, Swieqi added a third goal to the score sheet when Sammy Joe Barbara gave a pass to winger Emma Moore who layed the ball off to Aleksandra Georgieva to score in an empty net.

Swieqi next take on Tarxien for the last enounter of the first round next Tuesday 1st November at 8.15pm Zebbug Ground.