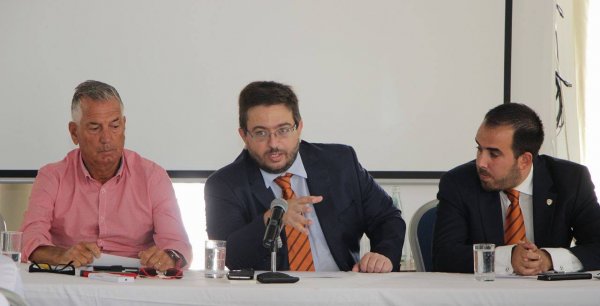 Dr Justin Fenech, President of Swieqi United F.C., together with Vice Presidents Dr. Robert Dingli and Technical Director Billy Mock, gave a brief introduction on the progress that the club has made till now and also spoke on the visions that as a club it has. Both focused on the Swieqi United One Team One Club philosophy. Technical Director Billy Mock highlighted the importance of the Academy and stated that it is vital that from the youngest age, children who play football need to be taught everything so that they can be professional footballers when they grow up and have a bright future.

Dr Justin Fenech, President of Swieqi United F.C., opened the event and explained that when Swieqi United F.C. was created back in 2009 the founding members aimed at creating a sustainable and modern football club with a professional corporate image. Progress is constantly being made and meetings are being held so that next season the club will be launching its own Philosophy with the aim of strengthening the club’s foundation, principles and core values.

Mr Leon Camilleri, SUFC Head of Football Education, stated the importance of having footballers with the right mindset. It is important that young people from a very young age start learning the importance of having such characteristics and values to be a complete player. Mr Camilleri linked this important point to the club philosophy as well because this philosophy will be useful to every person in the club.

Dr.Michael Calleja, Vice-President for Academy Affairs, stated that the Club is well-structured, more disciplined and more organised than it ever was before. Furthermore, Dr. Calleja has started helping in the Acadamy after several years helping in the Seniors. He argued that working in the Academy Section is such an interesting project.

Dr. Robert Dingli, Vice-President for Administrative Affairs added that Swieqi United F.C. was indeed a unique club that worked hard for its professional image on and off the pitch. Dr. Dingli highlighted the importance of having a unique brand image and identity of the club. The progress done through the SUFC Social Media pleased a lot Dr. Dingli. Furthermore, he took the opportunity to thank all the sponsors because without their financial support, it would be a big challenge for the club.

The Club proceeded in introducing all the Coaches of all squads to give the necessary updates and targets for Season 2016/2017.

Ms Mireille Vella FMA Financial Controller gave some important updates on futsal since a number of challnges had risen. However she appreciated the continuous support that Swieqi United FC give and was impressed with how organised the club is.

Swieqi Mayor Mr.Noel Muscat closed the event by saying that he was honoured with the achievements that the Club had made since its inception. Mr.Muscat added that it is vital for the locality of Swieqi to promote sport as part of living a healthy lifestyle. He ended by wishing the Club all the best in the upcoming season.

For more information on Swieqi United one can visit the club’s Facebook page or www.swieqiunitedfc.com