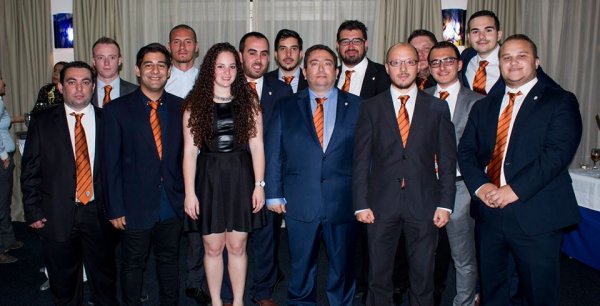 President Dr. Fenech recently opined that this year's committee has the chance to keep on improving the club's standards whilst working to be one of the best management committees on the island.

The new Board of Directors is contains a healthy mixture of youth and experience. The 'old guard' of Justin Fenech, Michael Calleja, Mauro Miceli and Robert Dingli (as President, Vice President/Secretary, MFA Council Member and Vice President respectively) will continue in the committee for yet another campaign. Mark Mifsud will also remain the club's treasurer and chief financial officer.

On the other hand, Giulia Muscat will continue overseeing the development of Women's football in the locality and will also manage the Women's team [helped also by Mauro Miceli]. Dylan Micallef will remain the club's Marketing Officer and Jeffrick Cachia will also retain his role as Media Manager.

The new changes within the Committee will be as follows:

Mark Zammit, a new resident from the locality of Swieqi, will be the Team Manager of the Under 17 Squad. Mark will form part of the Academy Team [headed by Michael Calleja] and will be working closely with Academy Manager Andrea Vella.

Andrew Schembri - will now be helping with the Under 13s and will also form part of the Youth Academy infrastructure.

Adrian Chetcuti and Timmy Gingell will be the new Events Co-ordination team- aimed at ensuring the club regularly organises fund-raising activities within the locality.

Beppe Degiorgio will this year occupy the role of Infrastructural Co-ordinator, a position that will ensure the club's projects are given their due importance.

Matthew Muscat will be heading the Seniors and Under 19s squads along with a Team Manager [Daniel Mifsud].

Mr. Jacques Ellul Soler, is once again joining the Committee [having been part of the set-up in 2012-14] and will be heading the Futsal Department.

Roderick Borg, another new Committee member, will also be working with Jeffrick Cachia within the Media department and finally,

Dr. Matthew Borg will be the club's international officer - aimed at fostering relationships with foreign clubs/entities.

The club wishes all the new members the very best of luck for the 2016/17 season and can assure all supporters that the management committee will strive to ensure the club keeps punching above its weight in all sectors of development. Forza Swieqi!