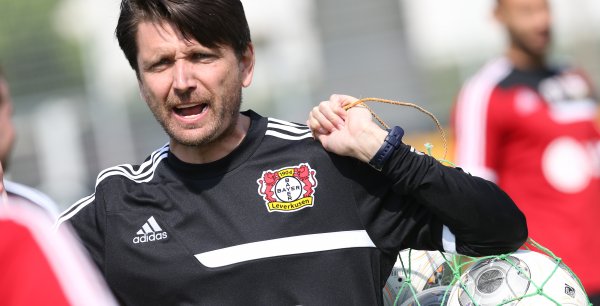 The third guest is Peter Hyballa.

In the summer of 2007, Peter took over the under 19s of Borussia Dortmund. He had a very successful spell with Borussia Dortmund. He won the Westphalia Cup in 2008. In 2009 Dortmund were crowned West German Champions, they won the DFB Vice Cup and also The German Vice Champions. They lost the Junior Cup final to SC Freiburg on penalties.

Peter signed for Alemannia Aachen as head coach. He spent ne season with the second division team. From January 2012 to June 2012 Peter Hyballa was the head coach of Red Bull Juniors Salzburg. This was followed with a one-year stint at SK Sturm Graz.

In the 2013/14 season Peter returned as an assistant coach to Sascha Lewandowski with Bayer 04 Leverkusen. In June 2014 he signed as head coach of Leverkusen U-19.

Peter Hyballa currently is a certified UEFA A coach. He also holds a Masters in Sports Science from the University of Munster. His thesis was based on Dutch talent in football. He also lectures (advisory level) at LMA, ITC and Soccer Teacher Training

We look forward to welcoming Peter and are very eager to hear about his philosophy and coaching experiences!

The Coaching Clinic will run from Friday 3rd June to Sunday 5th June and is open for all coaches and players born 2001-2004. Book as soon as possible because there are limited places!