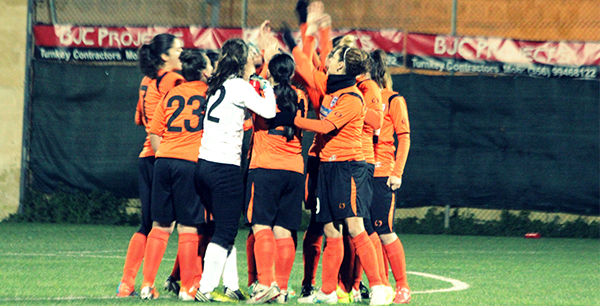 In the summer of 2014, with days before the deadline to apply, Swieqi United FC put forward an application with the Malta Football Association (MFA) to have a women’s team representing its team. With the MFA’s approval, the club spent a busy summer period recruiting girls to take part in this historic adventure. By the end of July, the club had over twenty players who reported to the first pre-season training session under the guidance of trainee coaches Max Bartolo and Jochen Lenders.

Swieqi managed to attract a mix of players; some never played football in their lives, others had 5-a-side experience whilst some even had experiences playing with other football teams in the league. What was evident for all to see was the amazing team spirit that soon formed between all the players. The club began to sort out registrations, medicals, equipment and kit wear amongst many other matters to prepare for their season debut.

The club made things clear with the players; it didn’t matter what the score was or how many goals we conceded. What mattered more was the fact that players enjoy themselves whilst respecting the club’s holistic approach to football and the principle of fair play.

Owing to the fact how the league was structured this season as being one league, Swieqi came up against well established and experienced teams, such as Hiberians and Birkirkara. However the challenge did not discourage anyone. More the opposite, since players confidence was growing training session after training session.

October 2014 marked the official team debut in the league, with a 5-0 loss against Tarxien. Despite the result, Swieqi put themselves on the women’s football map in Malta and started to attract a number of admirers to the team, most notably ex-National Team coach Pierre Brincat. Two weeks later and the club earned its first ever point in a 2-2 draw against Sliema. Swieqi ended the first round on 4 points, earning a win and draw in the process.

Swieqi were drawn against Lija/Iklin in the Knock Out, beating them 8-0 and earning themselves a spot in the Quarter Final against Hiberians which will be played in March 2015.

Swieqi got off to an excellent start in the second round (Section B), beating Lija/Iklin 14-0 and setting a club record. In the last match Swieqi beat Tarxien 2-0 to move to second place in the section with 10 points.

The team is coached by Andrea Vella who is assisted by trainee coaches Max Bartolo and Jochen Lenders. Committee Members Giulia Muscat and Becky Naudi are in charge of the administration side and all the team has the backing of the Swieqi United committee who turn up to their games to support them.