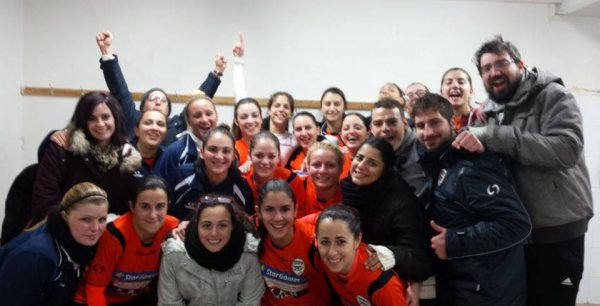 Swieqi United's women team demonstrated how far they have progressed over the months in last night's clash against Tarxien Rainbows. Having lost 5-0 to the Rainbows in the first round, Swieqi were determined to produce a better showing this time round and boy did they perform!

The coaches decided to play a safe approach to the game, putting 4 defenders in defence to mark out any threat that Tarxien could pose. Emma Grech was back between the sticks for Swieqi.

15 minutes into the start of the game and Amy Galea Gingell opened up the score line after running down the channel and beating the Tarxien defence and goalkeeper to cooly slot the ball home and put Swieqi into a well deserved lead.

Backed by a supportive crowd shouting in the stands, the ladies continued to grow in confidence throughout the match. Still celebrating her hat trick in the previous game, Kristina Agius added another goal to her name when she scored Swieqi's second goal to put the team into a well deserved 2-0 lead at half time.

The heavens opened up in second half. With no shelter to seek in the stands, the fans continued to give support to the girls and the girls showed their appreciation by playing some neat passing between them and going up in attack. Tarxien had their goalkeeper to thank for keeping the score line as it was, performing a number of fine saves. Kate Galea had the best chance of the second half when her free kick went agonising wide.

Emma Grech continued to show her excellent form in goal, keeping another clean sheet and providing the team with some well taken goalkicks that caused a scare or two in the Tarxien box. However Swieqi couldn't apply the finishing touches to add more goals to the tally and with more rain pouring down, referee Bonello blew his whistle to end this contest and give Swieqi a well deserved win and three points.

The team are now in second place in Section B on 10 points and have a well deserved break next week. Their next match is on Tuesday 10th February at 2pm at Zebbug Ground