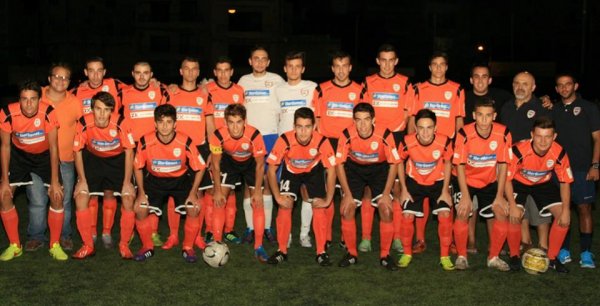 Not even a severe hailstorm prior to kick off could stop our minors from going out on the pitch and securing another vital 3 points in their quest for a first historic promotion.

With the referee still with his whistle in his mouth after signaling the start of the match, Kurt Fenech already had the ball in the back of the net! A quick counter attack by Swieqi with some impressive passing put Swieqi in an early lead. Ghaxaq thought they were still warming up for the match, for another swift counter attack found the unstoppable Neil Farrugia to make it 2-0 with barely 5 minutes on the clock!

Everyone thought Swieqi would go on a rampage, however Ghaxaq began to wake up and get into the game, limiting Swieqi's chances and trying to create their own chances. However they decided to revert to 5 players at the back which kept the Swieqi strikers frustrated at times. Thomas Debono went close with an inviting free kick.

With temperatures reaching close to freezing point, the referee ended the first half and allowed all those present to head to the bar for a well earned hot drink and discussion on the first half.

Swieqi started off the second half thinking that the points were already secured. Ghaxaq tried to capitilise on this, however they couldn't manage to bring the ball forward where they wanted it to go and Matthew Schembri acting in goal had little to do. Swieqi did try to bring the ball forward, however the contest soon started to resemble a hot potato competition with both teams shooting the ball wherever they pleased without giving much thought to its final destination.

Luca Borg ensured all 3 points were wrapped up when he scored a screamer from outside the box, leaving the Ghaxaq custodian with no chance. Michael Frendo thought he put his name on the score sheet, only to see a freezing linesman hold up his flag and rule it out for offside.

With a 3-0 scoreline all those presented were longing for the referee to end the match and allow everyone to seek warmer sheltar. Swieqi players and officials high-fived each other, knowing that their quest for a first historic club promotion was one step further.

This was the fourth time out of four games that Swieqi beat Ghaxaq in the Youth League.

Swieqi next take on Marsa on Monday 9th February at 8.15pm at Corradino Ground C.