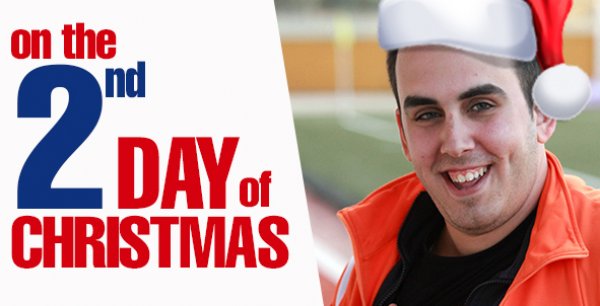 Question Number 1:
Hi Rob! You are currently in Leicester, UK on Erasmus and your physical absence from the games has definitely been felt! How is everything going?

Answer:
Hey! Leicester has been amazing – I am really enjoying my time here and time is definitely passing by fast (especially when you are having fun). I am really missing the club and the teams, especially since overall we have had a really positive start to the season. I still follow every game closely and definitely roar when Swieqi win! Cannot wait to be back!

Question Number 2:
You are fast approaching 5 years with Swieqi United helping out in various roles. Surely you have had some great memories that you can share with us?

Answer:
Yes of course! I still remember clearly the first game that I went to watch v. Qrendi when Simon Sammut scored a beauty goal from nearly half pitch in the dying seconds of the match to win the game for Swieqi 4-3! Another glorious moment was seeing the seniors team win promotion last year and also our futsal team defying all the odds and avoiding relegation in the final game!

Question Number 3:
Describe to us a funny moment that happened to you at Swieqi?

Answer:
A couple of months ago, our minors team played against St. Georges and were winning 8-1. Andrea Vella decided to play a prank on me and sent me messages saying we had two players sent off, as well as coach Mario and ended up 8-8 FT. Little did I know that all the players and committee present were in on the joke, so they all told me the same story and that the police were involved. I was so worried that I was supposed to go out that night but didn’t even go out! About half an hour later, Adrian sent me an SMS telling me what an awesome victory that was – I then realised that I was the victim of a well planned joke!

Question Number 4:
You are currently studying to become a lawyer and at the same time you occupy a demanding role at the club as the Club’s Deputy Vice President for Club Affairs. How do you manage?

Answer:
Strangely enough, I see my role with Swieqi United as being a break from the daily routine of studying law. For me I look forward to attending a game in the evening after a day at University or studying. Also seeing the club being run by other youngsters gives me energy to keep on going. Granted that it is no easy manner, however I have been doing this for 5 years now and you could say throughout my entire time I’ve spent studying law! This proves that everyone can have a hobby whilst at the same time studying in a full time course.

Question Number 5:
Where do you see the team in the future?

Answer:
Swieqi is a club that is constantly growing. I am sure that in a couple of years’ time it will be one of Malta’s most prominent football clubs who would develop Malta’s finest football players. We have already witnessed amazing results with the U-19’s and U-17’s squads, as well as see some players flourish under Swieqi’s wings who I am sure will be rewarded with a call up to the national team one day. There is no reason to see that the club would not have a bright future ahead of it.