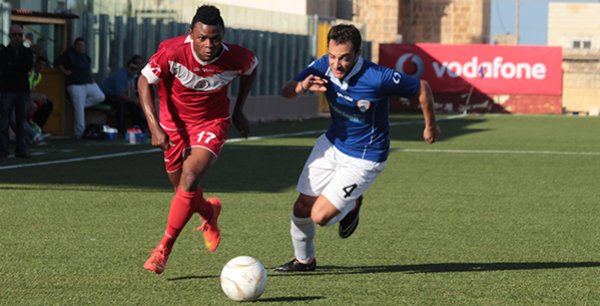 Swieqi faced up to a very tough Gharghur team at the Luxol Stadium on a beautiful sunny day in December. Despite some injuries, Swieqi were still able to field a competitive team and welcomed back the Briscoe-White brothers after almost a month on the sidelines. The Blues got off to a perfect start when Kenneth Ekezie was fouled by Gharghur Goalkeeper Zach Valletta in the penalty box. Leontiev Konda made no mistake from the penalty spot. Thereupon, Gharghur and Swieqi engaged in a chess like game with both teams fiercely contesting the midfield duel. Gharghur's presence began to grow and when a goal was disallowed for offside, the reds then equalized 30 seconds before the break. A mix-up in the Swieqi defence allowed foreigner Muda to score and tie the score. Coach Debrincat asked his players to up the tempo in the second half and maintain their concentration. This was achieved albeit almost suffering a goal. First Matthew Sapiano saved from point blank range and the same goalkeeper managed to clear the ball off the line despite fierce Gharghur protests that the ball had in fact crossed the goal line. The game seemed to be heading for a draw when in the dying minutes, Jonathan Briscoe White rounded the keeper and tapped the ball into the net sending all Swieqi FC personnel into raptures. An important three points gained after a bruising encounter. Formation: M. Sapiano, M. Asciak, G. Refalo, K, Sultana, M. Farrugia, J. C. Borg, J. Briscoe White, O. Smeir, G. Buttigieg, L. Konda, K. Ekezie. Subs used: S. Bonello, M. Fenech, P. Briscoe White. Subs not used: M. Mulholland, D. Bezzina, S. Sammut.