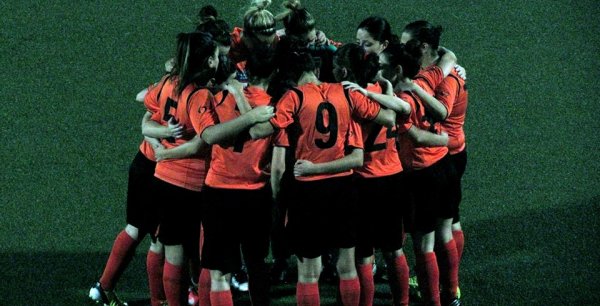 Swieqi United took on neighbors Pembroke on Tuesday night at Luxol Stadium. In their first encounter against each other, Swieqi faced a strong team in Pembroke. However playing in only their 10th league game of the season, our ladies certainly made the club proud by playing a very enjoyable game with some great passes between them and also managing to grab a goal.

Although the final score line was 4-1, such score line does not reflect the team spirit shown by these ladies. The team never threw in the towel and kept on fighting right till the end, constantly encouraging each other to keep on fighting.

Finding themselves 2-0 down, Swieqi managed to pull a goal back thanks to Giulia Muscat and headed into half time trailing 2-1. Swieqi came out fighting in the second half and were unlucky to find themselves 3-1. Pembroke assured themselves of obtaining maximum points when they scored their fourth and final goal. Swieqi continued to stick to their game plan and earned praise from those who came to support them in the terrible weather conditions.

Giulia Muscat grabbed her first goal in her Swieqi career and also found herself entering the club's record books by becoming the fourth SUFC committee member to score a goal for the club!

Swieqi Women's next take on Lija/Iklin on Tuesday 16th December in the First Round of the Knock Out Round at 8.15pm at Luxol Stadium. This will be their last match for the year 2014 and we thus encourage everyone to come and give their support to this fantastic group of players !