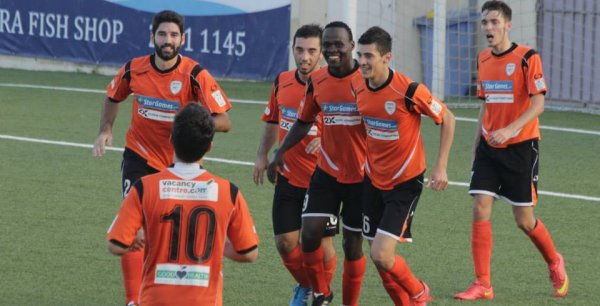 Swieqi United continued their recent positive run in the BOV 2nd Division when they defeated Ghaxaq comfortably 3-0 on Friday night at Luxol Stadium.

Coming from a 6-0 exit in the FA Trophy v Gzira, coaches Debrincat and Cauchi urged their players to put their disappointment behind them and go out and bring back home maximum points.

The players certainly did deliver on the night, playing arguably one of their best matches of the season so far.
On 29 minutes, Kenneth put Swieqi in the lead with a well taken header after receiving a perfect cross from Jean Claude Borg. Barely 7 minutes after, Omar Smeir doubled the score for Swieqi, putting Swieqi into a comfortable 2-0 lead heading into half time.

Swieqi United continued the second half where they left the first half, penetrating Ghaxaq's side of the pitch and giving their opponents few changes to write home about.
In the 66th minute, referee Apap did not hesitate to point to the spot and awarded a penalty to Swieqi which was coolly converted by Konda to put the game to bed and give Swieqi a 3-0 lead.

The referee's final whistle was met with a loud roar by the Swieqi United clan, especially since this was a victory for the SUFC coaches over their previous club.
Such victory certainly started off the weekend on the right foot for all involved at Swieqi.

Swieqi United next take on neighbors Gharghur next Saturday 13th Decemebr in the BOV 2nd Division at 2pm at Luxol Stadium - We urge everyone to come and give their support.